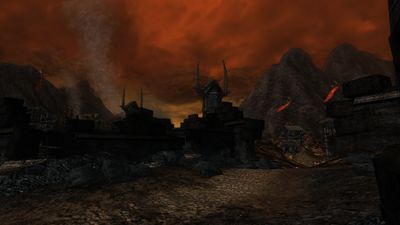 Fushaum Tûm or Fushaum Tum (Black Speech for Smoke Camp) is a point of interest within Dor Amarth on the Plateau of Gorgoroth. [51.0S, 11.4E]

This large encampment is occupied by level 115 Orcs, Uruks, and Olog-hai under the command of Thorakó, the Hewer and the Uruk mercenary Shatúrro, the Spear. It has two distinct parts.

In the south, where the main entrance is, black stone ruins provide an additional layer of defence. Here is where Thorakó and Shatúrro can be found, along with many of Thorakó's Warriors and many Uruks. The northern part of the camp is more open, however Uruks and Olog-hai still guard the perimeter. In this section dwell many common Orcs amid their huts.

Many enemies stand guard at choke points in Fushaum Tûm, and others patrol, particularly in the south. However with caution and nimbleness it is possible to avoid many of them, such as by climbing over ruins and rocks.

This encampment was originally led by the Easterling commander Khirgi, the Hunter. However, he has since been ousted by the Olog Thorakó, the Hewer, who now undertakes several efforts to strengthen the encampment and secure his power. The Uruks of Fushaum Tûm train for combat while a supply of weapons is gathered, though their intended target is unknown to the Conquest of Gorgoroth.[1] Thorakó's Warriors have begun enslaving Orcs and Easterlings, apparently using cages guarded by Uruks to hold them.[2] Shatúrro, the Spear, an Uruk mercenary who has also been seen in Fushaum Bal South,[3] holds a post here. Thorakó also hosts an emissary from Nargroth, raising the worrying possibility of a alliance between the two strongholds.[4]