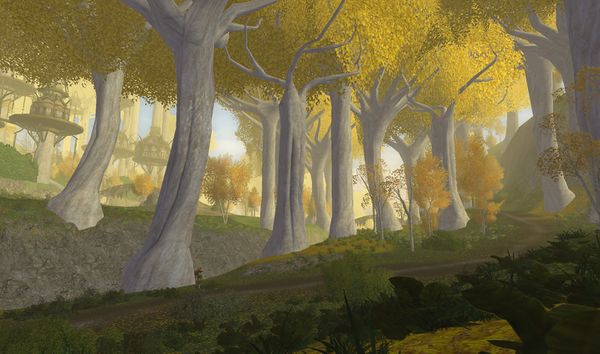 Egladil is the southeastern part of Lothlórien, containing the easternmost portion of the river Celebrant.

Creatures that can be found here are mostly passive and protected, but there is an agressive rare elite mob wandering around Egladil (Namely, a few leagues away from Imlad Lalaith), and there are agressive mobs called Anduin Lizards, which sprays a DoT that attracts other Lizards.

These landmarks are located within Egladil:

Egladil (Sindarin for "Angle of the Eglain") the name given by the people of Lórien to their lands between the courses of the rivers Anduin and Celebrant. These are the most populated parts of the country, where the tree-city of Caras Galadhon is found, and where The Vineyards of Lórien are. [1]

Tolkien Briefly mentions Egladil as the place where Frodo Baggins and his companions had a farewell feast, prepared by the elves of Lórien.