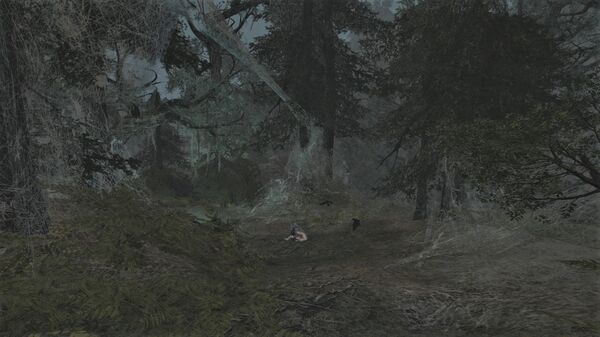 "The Great Spiders of Mirkwood have begun to stir again, and the Elves of Thranduil, King of Mirkwood seek to learn the cause. What dire darkness has arisen within the wood to summon forth such evil?"

The instance begins with a wounded elf scout speaking to you. The portal behind you obviously leads out of the instance, but the cave to the right leads to the boss encounter, so remember this if you wipe. It will save a lot of time. As you proceed, you will encounter spider web cocoons, that can either contain an elf scout, a hostile mob, or nothing. Make sure you clear out the area first, as the cocoon may contain a poisoned troll, and the last thing you want is for a large group of mobs to wander into the middle of your fight. In this first area you will find a pack of black dogs, and a scuttle-dells crow. Attacking any one of these mobs will trigger all of them to join the fight. It is, nevertheless, an easy pull. Proceed on, opening all cocoons you see in your path. The path is relatively linear. The web bridges you cross are impossible to jump off of. There are 2 cross-roads that can be found here. Going right will lead further on in the instance, but going left has some more cocoons which will probably contain elves that need rescuing (necessary to complete the quest spiders and flies). You will also find elite patrolling wights that do not allow any morale or power regen. Eventually you will find a large barrows section of the forest, with three wights on separate mounds. Once they are killed, quench the barrow flames on each mound to start the Beremud fight.

Beremud summons ranged and melee adds, and has a nasty DoT aura. It will be very hard for your tank to get all the ranged adds, and the boss into one aggro conglomerate. Instead, try having the tank tank the boss, and all melee adds, while your DPS deals with the ranged ones (who are not elite, and easy to kill). Make sure everything is far from the healer and you'll be fine.

After the boss is defeated you can proceed on by clearing the webs away. There are now mostly spider mobs, but these pulls are about as easy as the last, so do not worry. There are more cocoons along the way. Continue to use the "guiding right" navigation rule, and eventually you will come up a large hill.... and back down again to Dígelir.

There will be another wounded elf scout who has a torch for you. This torch can be used to burn away the hatchling cocoons (which cannot be destroyed in any other way, and titularly, summon swarm adds until you burn them). While the tank tanks the boss in the center, the DPS member of the party must destroy the adds, but watch out, there is a large pit of endless webs, and you are precariously balanced on a intricate cross-way of webs. While the tank's path is "run to the giant spider", the member of your party burning cocoons must take certain routes to reach each cocoon. If none of the hatchlings slow the cocoon burner, you can reach all of the cocoons in one go, but you probably won't, so when your torch burns out, go back to your elf scout, and get a new one. Once all the cocoons are burned down, you can proceed to kill the boss. The boss summons some tougher adds, but these can be AoEd down. Once the boss is dead, you can loot your chest and leave.

Webs of the Scuttledells Mobs