This page is about the location. For the raid, see The Tower of Orthanc. 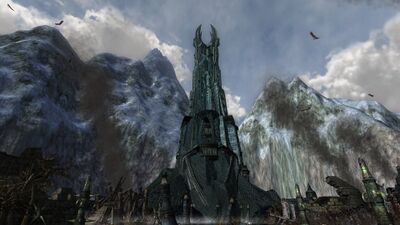 The heart of Isengard is the Tower of Orthanc, a massive black tower constructed late in the Second Age by the survivors of Númenor and contained one of the seven palantíri. The tower is now the seat of Saruman the White. The tower sits within the stone walls of the Ring of Isengard, at the end of Nan Curunír. The interior of the tower isn't accessible outside of quest instances, though the building looms over every version of the Ring of Isengard.

This is also where the raid the Tower of Orthanc takes place. 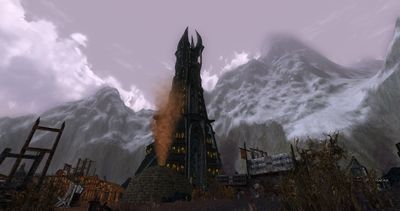 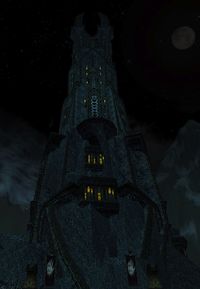 the Tower of Orthanc at night

Orthanc is the black tower of Isengard. Its name means both "Mount Fang" in Sindarin, and "Cunning Mind" in Old English, the language Tolkien uses to "translate" Rohirric. It is interesting to note that in certain interpretations, Grendel's glof (Glove or Paw or Stomach or Bag) in Beowulf is described as being made with orþonc (ll. 2087-88).

Orthanc was, according to J.R.R. Tolkien's legendarium, built during the end of the Second Age by the men of Gondor out of four many sided columns of rock joined together by an unknown process and then hardened. No known weapon could harm it. The Ents themselves could not break the tower, although they could split solid rock into fragments with ease. Orthanc rose up to more than 500 feet (150 meters) above the plain of Isengard, and ended in four sharp peaks. Its only entrance was at the top of a high stair, and above that was a small window and balcony.

Orthanc housed one of the palantíri of the South Kingdom, and was guarded by a special warden. In the days of the early stewards the tower was locked and its keys taken to Minas Tirith. When Isengard fell to the Dunlendings in T.A. 2710 they were unable to enter the tower.

From that time on, the valley where Isengard stood became known as Nan Curunír, which literally translates as the 'Valley of Saruman'.

Curunír was the Elvish equivalent of Saruman's name, but when rendered into the Common Speech, Nan Curunír is known simply as the 'Wizard's Vale'.