This page is about the landmark. For the resource instance, see The Withered Heath (Resource Instance). 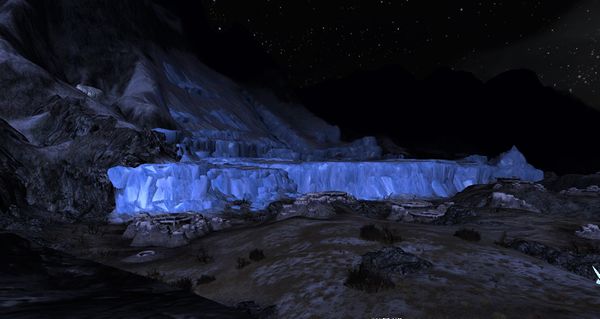 The Withered Heath is an area within Ered Mithrin and Withered Heath. It is in the North-east of the Region, and dominated by the edge of a glacier wall called the Anvil. Inside is a 12-person raid called The Anvil of Winterstith. The rest of the Grey Mountains lies to the south, through the Wyrmgap.

The Withered Heath has long been known as a breeding ground for Dragon-kind, especially for cold-drakes such as Hrímil Frost-heart and her brood. Hrímil once made her lair in the great glacier of the Anvil of Winterstith, before her imprisonment beneath Barad-dûr, and with the fall of Sauron she has returned. Many dwarven kings, Longbeard and Zhélruka alike, have lost their lives in the Withered Heath, some hunting drakes, some seeking the remains of their kin, some in search of the fabled citadel of Thafar-gathol.