The Lord of the Rings Online: Siege of Mirkwood 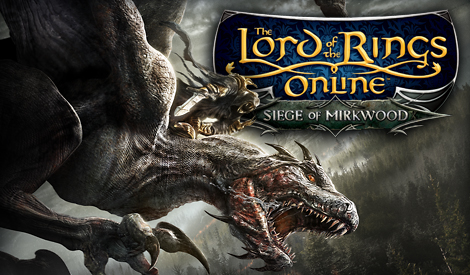 The Lord of the Rings Online: Siege of Mirkwood is LOTRO's second expansion. With this expansion, players could venture into the grim Southern Mirkwood, joining the Elves in their siege of Dol Guldur. The expansion was the first to be sold web based only.

This page aims to give an overview of the release history and the main features of the expansion.

Just like with Mines of Moria, Siege of Mirkwood expanded character progression by adding levels. However, the amount of levels was lower: five levels were added, raising the level cap from 60 to 65. Players could also make their character more powerful by acquiring new gear with higher stats and leveling up their Legendary Items with five additional levels. LI's were made to be more customize-able, with a fourth runic slot added and the ability to craft Second Age Legendary Items.

No new crafting level was added; tier 6 remained the highest level. However, new crafting recipes were released. Many of these recipes could be bartered with the new Malledhrim faction.

The story content of Siege of Mirkwood upon release concludes the Mines of Moria story, the second of the Epic books. The third Epic story line, Volume III Allies of the King, launched a couple of months later. This story line focuses on the Grey Company and is completely unrelated to Mirkwood. The story continues in the Rise of Isengard expansion.

The following new regions were added:

A new instance type was introduced, called skirmish. Skirmishes contain automatically generated randomized enemies. The idea was that this would make encounters less predictable, offering more exciting gameplay. Skirmishes can be played solo or together with other players (1 to 12 players, depending on the skirmish). Within a skirmish, players are paired with a Skirmish Soldier that reacts to simple commands. The soldier can be customized with a trait system, both in battle proficiency and in appearance.

The expansion also came with a set of regular instances, themed around the siege of Dol Guldur.

*This instance was years later converted to a full fellowship instance (designed for 6).

September 4, 2009, Turbine officially announced the development of Siege of Mirkwood. That same year, the expansion was released on December 1 in North America and December 3 in Europe.