From Lotro-Wiki.com
(Redirected from The Forges of Khazad-dum)
Jump to navigation Jump to search

There are no greater craftsmen than the dwarves, and no greater forges than those found in the depths of Khazad-dûm. For ages, the dwarves of Khazad-dûm mined and wrought mithril in their great craft-halls, shaping great works until Durin VI delved too deep and awoke his bane, a Balrog of Morgoth.

For centuries afterward, the forges of Khazad-dûm lay silent, crumbling from disuse. The Orcs and goblins who came to infest the darkened halls knew not the ways of their use, and stole the valuable metalworks of Durin's Folk. So the forges remain, awaiting the day when dwarves once again kindle their fires – if such a day ever comes. -- [1] 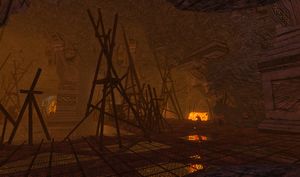 The entrance is near Hudnul-meden in the south of The Flaming Deeps. This is a level 59, 6-person, 4-boss instance, and it is a part of the Moria Quest Pack (not included in subscriptions).

Bulwarks of the Enemy

The following quests relate to this instance:

The following creatures are found within this area: Forges of Khazad-dûm Mobs

The instance is very flame oriented so fire mitigation will help as well as keeping an eye out for fire environmental effects such as the flames of the forge during the third and fourth bosses. All the mobs will drop water pouches; everyone should get some to cure the flame debuffs for the second and third boss fights.

At the end of the first tunnel, mobs will spawn from the two side tunnels until someone grabs a keg of black powder and blows them up. The first boss lies just beyond the gate.

In the boss room, there are tracks around the edges that will have trolls walking around that will stun and damage all who get in their way. During the fight, Narkû will say: "You beg too much for my attention <player name>." The named player has to get out of line of sight or else he will say, "I warned you, <playername>!" and hit the player with around 2k of damage. When a mob says: "Fire! Fire! Fire!" Fire will drop on the floor which deals heavy damage, and soon after this adds will come in.

As soon as you kill Narkû, the final boss will dare you to challenge him and the 30-minute challenge mode timer begins.

After running down the tracks to the lower level, the encounter with Dhaub begins soon when you hit his platform. If a player had to leave the instance and lost his water pouches, they can be traded or there are more mobs on platforms along the tracks which drop them.

On this platform, there are six paths, each leading to a gate that spawns mobs. When opened each of these gates will need to be blown up by using a keg of black powder found on the platform. Running into a troll along the path will cause a player to drop their keg of black powder.

After four gates are blown up, two of Dhaub's troll guards come to his aid. They will be healed completely by Dhaub while he is alive, but they can be crowd controlled by roots, mezzing and fear. Once all six gates are blown, the boss jumps down and engages the fellowship. During this fight he will apply a powerful DoT curable only by a water pouch after he says: "Feel the bite of black powder." This attack is also interruptable. Once the boss is down, kill the trolls and loot the chest.

Further down the tracks, the fellowship will encounter Thrug wandering next to a large forge. Watch for the fire wounds he does; cure them with water pouches. There will also be fire shooting from the forges, which will deal very heavy damage.

Kranklûk waits on the other side of the forges. The fight starts with two trolls and Kranklûk joins a few seconds later. When Kranklûk drops to 57-58k he runs off to get more trolls. Once he gets to 41k or so he will get another troll. He will also start calling names, similar to the first boss. When he calls a player's name, that player receives an eye symbol over his head, and should turn his back to him and stop attacking. Once the symbol is gone you can turn around again.

At 20k he will go green again and summon the last troll. At this point the group must begin running around the forges in a clockwise direction, trying to stay ahead of the flame jets. The troll can be crowd controlled, but the boss must be kited around the forges while damaging him. Once he is defeated, loot the chests.

After the fourth boss, in the hallway of the exit lies the Light of the Rising Dawn trigger which summons Ruingal, a fire grim with powerful AoE attacks.