The Dome of Stars

This page is about the World instance. For landmark in Osgiliath, see Dome of Stars. 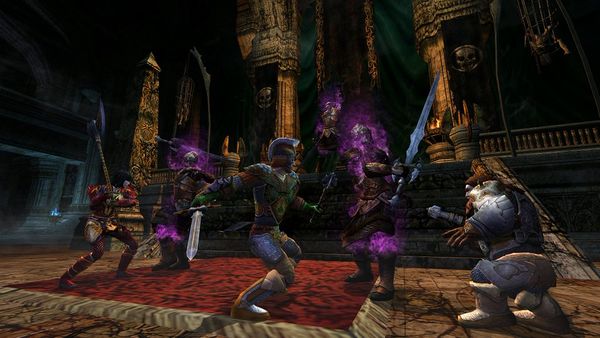 "On the eve of Sauron's assault against Minas Tirith, ships of Umbar sail up-river to the White City. Meanwhile, atop the Dome of Stars, the Black Blade of Lebennin casts a dark shadow over Osgiliath and the host of Minas Morgul below. If his spirit cannot be banished to Mordor before uncovering Aragorn's gambit, it could spell doom for all of Middle-earth."

The Dome of Stars is a fellowship World Instance in the Osgiliath Culverts in Eastern Gondor.[62.7S, 8.8W]

This is a scaled instance, designed for a fellowship (6 players) from level 50 and up.
It is available in the Instance Finder.

Estimated completion time is between 40-60 minutes.

The Dome of Stars Mobs

The first boss after clearing some trash is Upâl-keng, a mûmak who becomes active after the main NPC in front of him is defeated (if that NPC is minstrel distracted, then the second set of archers on either side in the back row may be killed without pulling him or starting the boss). The first set of archers are connected -- it doesn't matter whether any are distracted, if one is then they all are. The boss has a five minute enrage timer.
During the encounter, waves of Haradrim will join the fight. Remove corruptions from archers and remove poison/acid DoTs from players. Upon defeat, the Haradrim Venom-arrows adds drop a puddle of gas which debuffs the boss to enable DPSing. Watch out periodic trample effect after the enrage timer has expired! Big frontal special attack.

After Upâl-keng there are lots of trash MOBs with nasty effects. Defilers hit an AoE irremovable poison that takes 80% of morale, so keep crowd control on them and flee others if affected. Scouts pull other MOBs. Later trash MOBs are less consequential.

The Rook summons lots of craban with four Easterling Sorcerer-lords.

The final boss encounter, The Black Blade of Lebennin has three waves of adds. The boss applies an irremovable fear, and needs corruption removal.
The first wave of adds are generic spirits that blow up upon defeat for 80% morale, simply move away before they pop to avoid damage. A good way to do this is to have a Lore-Master root some of the ghosts, and use Bane-Flare to mez the rest while ranged dps takes them down. A captain tank can take a different approach by balling up the spirits apart from the group and popping Last Stand, while the ranged DPS AoEs them down.
The second set of adds are named MOBs previously encountered throughout the game that are priority. They're Mazog, Gorothúl, and Achardor also a Fell-beast.

For the tier 2 challenge, keep one of these up while you kill the boss, so don't use AoE in this fight. Another strategy for completing challenge is to daze/root/mez one ghost as far from the group as possible to keep it from accidentally being killed by AoE DPS.