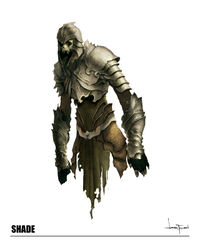 Shades are the spirits of the unquiet dead, bound to Middle-earth by unfinished business. Some are Oath-breakers, vile traitors placed under a curse as penance for their betrayal of commanders and kings. Only by making amends for their sins will they at last know peace. Other Shades simply linger in the mortal world, attempting to complete a task or bound to an area by the violent and sudden nature of their deaths. Weaker Shades known as Corpse-candles manifest as glowing balls of light that swarm around adventurers. They often lead travelers astray in dangerous bogs and marshes.

Another order of Shades has dwelt so long in darkness that their origins are forgotten. These Fell-spirits were summoned out of the Void beyond the world to animate the bodies of Wights, transform enslaved Men into deathless Gaunt Men, and give intelligence to the Watching-stones. Similar spirits bring life to befouled rivers and streams as Darkwaters. There are many such spirits in the Dark Lord's service throughout Middle-earth.

Shades are considered normal difficulty and are always aggressive. They are particularly weak to Westernesse damage, and some are resistant to Common and Physical damage.

They are found haunting areas such as Angmar, the Fields of Fornost, Evendim, Enedwaith, and Parth Celebrant. Specific Shades can also be found in Bree-land, the Lone-lands, Forochel the Paths of the Dead, and the Vales of Anduin.