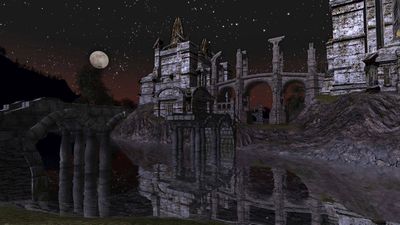 Ost Celebrant is a landmark within Parth Celebrant in The Great River. [30.3S, 56.0W]

The ruins of an ancient gondorian keep stand at the southern edge of Parth Celebrant, overlooking the green plains, and guarding the Northern Boundary of Rohan.

(Note that the Bridge to Rohan [31.3S, 56.6W] is to the west (on the right as you approach Ost Celebrant from Stangard) of the ancient Gondorian keep, Ost Celebrant [30.3S, 56.0W]. The very visible bridge on the left leads into the Keep and a host of undead, but not to Rohan!)