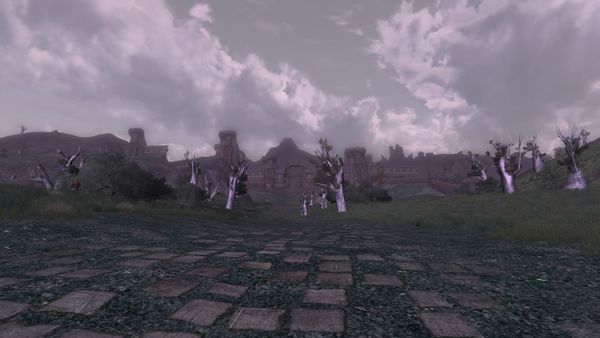 The North-South Road is the longest road in Tolkien's fictional realm of Middle-earth as it ran from the lost realm of Arnor in the north to Minas Tirith in Gondor in the south.

Before the breaking of Beleriand in the War of Wrath, the Great East Road was the longest road in Middle-earth. After Beleriand sank beneath the waves, the Old South Road had supplanted it. In the early Third Age, the road served as the main linkage between Gondor and Arnor. The road was the lifeline between the two kingdoms, and existed well throughout Tolkien's legendarium. By then this road, together with the Great East Road, became known as The Royal Road.

The road passes through the Andrath and meets up with the road out of the Southfarthing from Sarn Ford. It then runs south-east through the desolate wastes of Minhiriath to the ruined city of Tharbad on the Gwathló (Greyflood). At Tharbad, the ruined bridge-town, the road crosses the Gwathló via a series of causeways and a massive stone bridge over the river. From Tharbad, the road continues south-east through the land of Enedwaith and enters Dunland just west of the Misty Mountains. In southern Dunland, the road turns due east, crosses the Fords of Isen near Isengard and enters the Gap of Rohan between the Ered Nimrais and Hithaeglir.

Upon crossing the River Isen, the road enters the Kingdom of Rohan and becomes known as the Great West Road. The road then travels eastward slowly sloping south along the northern edge of the Ered Nimrais through Edoras and entering the Kingdom of Gondor by crossing the Mering Stream. Ultimately the road reaches Minas Tirith, the capital of Gondor.

While the North-South Road is said to run from Fornost to Minas Tirith, it continues as the Great West Road towards Minas Morgul and the gates of Mordor.

The North-South Road is specifically mentioned in The Lord of the Rings, when describing shipments of pipe-weed from the Shire's Southfarthing to Isengard. Saruman's ruffians also used the road to reach the Shire, as did he and Gríma Wormtongue just before the Battle of Bywater.

Boromir is also mentioned as having used the road, travelling from Minas Tirith to Rivendell. He lost his horse at Tharbad's broken bridge. The Nazgûl also used the road when they travelled north in search of the One Ring.

The Old South Road - A Third Age name for the section of the North-South Road from approximately Tharbad southwards. Most of this route had ceased to exist by the time of The Lord of the Rings, with only remnants of the causeways still extant in the fens of Minhiriath.

Notice: The same term was also used to describe a road in Beleriand in the First Age which ran from the Pass of Sirion, past Doriath, and down to Nargothrond.

An old road of the kingdom of Gondor passing from the Fords of Isen along the northern end of the Ered Nimrais, past Edoras, to Minas Tirith.

From Minas Tirith this road turns due east to Osgiliath, where it once crossed Anduin via a great stone bridge. From Osgiliath, the road continues across Ithilien and ends at Minas Ithil, which by the end of the Third Age had become known as Minas Morgul.

The article on the Royal Road discusses more roads across the realms of LOTRO.