The Hill of Erech

From Lotro-Wiki.com
(Redirected from Hill of Erech)
Jump to navigation Jump to search 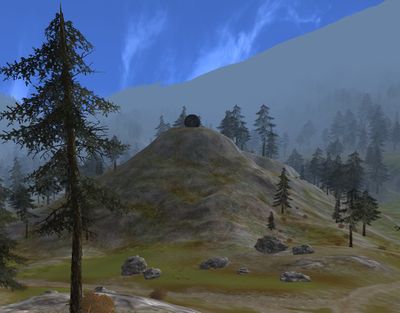 The Hill of Erech is a landmark within the Blackroot Vale in Western Gondor. [58.2S, 65.1W]

The following deeds in western Gondor and central Gondor can be advanced by visiting this location: 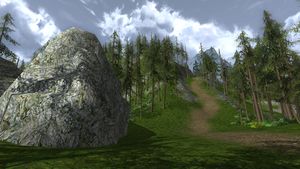 The Stone of Erech sits atop this hill, placed there by Isildur to mark the escape of Númenor's sons from the deluge.

We first encounter The Hill of Erech in Volume III: Book 3: At the Stone of Erech as Isildur first forms a pact with the Men of the Mountain to fight against Suron, and then curses them when they fail to fulfill their oath (the hill as it is portrayed in the instance is of a much larger scale than the version that appears in the main world).

Note: This instance can be revisited by going to the Spire of Meeting in Rivendell [29.9S, 4.8W] and reviewing the Chronicle of Events.

It was done. The allegiance of the Men of the Mountain was secured.

Later, upon discovering that Sauron had returned, Isildur is at the summit by the Stone of Erech, waiting for the Men of the Mountain to arrive and fulfil their oath.

Isildur says, "I expected you earlier than this, Rioc. And why have you brought so few men?"
King Rioc says, "We have not come to fight for you. Your strength is nothing before that of Sauron."
Isildur says, "What are you saying, Rioc? You swore an oath to fight against Sauron!"

But the Men of the Mountains refused to fulfil their oath.
They had worshiped Sauron in the Dark Years and thought they would be rewarded.

King Rioc says, "You do not frighten us. Sauron will crush your kingdoms as he has before."

They fled before him, his curse echoing in their ears.
They fled to their homes in the mountains, but they could never escape Isildur's curse.

Following Aragorn's passage through the Blackroot Vale, we return again to Erech in Volume IV: Quest:Book 1: Chapter 4: Atop Erech

The Stone of Erech is one of the seven Vandassari in the game and is originally called the Orossar.