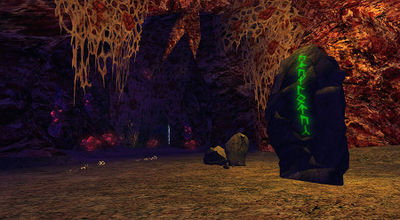 "In the deepest delvings of Moria dwell nameless things which shun the light and feed on the darkness. The Elves of Lórien strive to constrain the evil creatures, but led by the evil Gurvand, they may be too strong to hold back forever..."

Dark Delvings is a level 58, 6-man instance in the Foundations of Stone of Moria.

This area is a bizarre and surreal place of ancient evils, shimmering vines resembling glowing entrails, and the remnants of some dwarf expedition long since destroyed. The less said about these horrid halls, the better. Unless you have the bearing and resolve to brave these insane places, it is best not to dwell overlong on them.

And as much shadow mitigation as you can possibly get

Also, this instance wasn't called the Dark Delvings for nothing. There are runsetones throughout the instance that are the only source of light.

There is also another debuff that you need to avoid. It's called Gurvand's challenge, but I will call it the challenge debuff. Every now and then, you will get a message that "Gurvand screams loudly and the darkness shrinks in." A few seconds later, it will tell you that a "gust of vile wind sweeps through the tunnels," and that "the runestones are unaffected." If you are standing in the dark when it happens, you get the challenge debuff lvl 1.

This times out quickly, but if you are caught in the dark when it happens again, you get lvl 2, and over again up to lvl 5. It cannot be dispelled by any skills from any classes.

The easy way to avoid this is to stand in the light. If you see "Gurvand screams," get to the light. If you have to go AFK, do so in the light. As you progress towards the final boss, he will put out this challenge debuff more and more often, until he is doing it every 1-2 minutes or so. DO NOT let this stack up on anyone.

Now, an overview of what you will meet in the Dark Delvings. Most mobs in the Dark Delvings are immune to stuns and dazes. No distraction, no stuns, no Lore-master dazes. There are reports that Rune-keeper's shocking touch works on most mobs though. Lore-master stuns in the corridors between the bosses do work and is very useful. Apart from that use roots which will make things MUCH easier.

Now, lets got down to business. When you enter the Dark Delvings, you will be standing by a runestone, and there will be one path in front of you. Patrolling this path will be your first mob, a single Darkmaw Master. Remember his frontal AoE, bring him into the light and take him down (deal with his add last IF he spawns it). Then move forward to the next runestone.

The next pull is 4 mobs: 1 Master, and 3 overseers (2 howling,1 snarling). I strongly suggest a root-pull, but if you want to take them all at once, make sure you target through your Champion to take them down 1 at a time quickly. Priorities should be Master, Howling, then the two Snarling. Go forward to the next light, and pull another Master Patrol, then you have a second group just like the first. Note that there are 3 patrolling mobs in this instance, and they are the only mobs that re-spawn. Re-spawns occur about an hour after they are killed.

After the battle is over, you can move about the room. Only one of the stones in the room can be turned on at one time, so don't waste your time trying to turn them all on. Loot the chest (it usually has a silver or bronze coin) and then step into the light to continue the instance

The next pull is 2 darkmaw masters. This might seem easy, and I would caution you 2 masters at the same time is no picnic. Try a root pull, and have the tank pick both of them up once the root wears off, if possible. You can offtank one if you like, but the key to surviving long enough to kill them is to watch for the AoE damage and try to stop the masters form summoning their adds.

Move to the next light and turn it on. In front of you will be 2 darklings and a world eater. The worldeater is a pushover with a big health bar, so take down the darklings first and watch for wounds on you tank.

Once you beat the boss, all five lights will come on and you can loot that second chest. This one usually contains a coin, too. Then move onward to the next light.

Then you can kill the adds, loot the chest, pick up runes and get that second-rate helm that you've worked so hard for. Because you get the helmet to your armor set from the watcher, not from the Dark Delvings. You can exit from behind the boss, and you will find that it brings you back around to the entrance and you can leave.

If you just want to defeat Gurvand for the quest, use Easy Mode not the Challenge Mode. After about ten failed tries using the tactics given above, my group developed the following approach. It worked on the very frst try and was almost too easy,... almost.

Have everyone, especially the minstrel, standing near the stone at the start. Everyone will stay right there for the entire fight, except the guardian.

Before the fighting starts, have the guardian explore the area to locate the outermost position at which the light from the stone still protects him. The guardian will fight from that approximate location (or a little closer to the light).

The guardian goes and gets the boss (Gurvand) and brings him over into the light of the stone and then turns him to face him away from the stone. The guard should position himself in line with the boss and with the walkways on the platform. That way, if Gurvand does a knock-back, the guardian is not knocked off the platform.

The minstrel heals the guardian - always!

Got it? Guardian tanks the boss; minstrel heals the guardian.

Your group's #1 priority is to keep the adds off of the minstrel! Luckily, the adds are fairly weak and easily defeated.

Champions and guardians need to interrupt Gurvand's inductions (red cirle around his feet) to prevent the knock-back.

When not fighting adds or interrupting, your group beats down the boss from behind.

Note to the group - when the guardian first attacks the boss, the lights go out and an add drops down from above. Have one person re-activate the stone (right click it). Everyone else take out the add(s), then get on the boss (from behind).

Your group never has to move because the light from the first stone never goes out - Gurvand is facing away from the stone and never hits it.

That's it. It is much easier and almost fool-proof. It worked the first time we tried it. It might even work for Challenge mode but we did not try that.

The warden class quest is found in the same room as the second boss, right click the altar to summon.