From Lotro-Wiki.com
(Redirected from Creature)
Jump to navigation Jump to search

Throughout Middle-earth you will find many different types of creatures, which may or may not be aggressive, running the gamut from humans to "common beasts" and even monsters.

In LOTRO, and at LOTRO-Wiki.com there are two terms used to refer to enemies. While often used interchangeably, consistent usage on the Wiki is defined by: 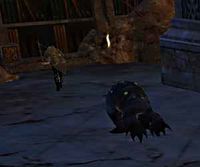 A third term: Non-player Character (or NPC), is used to describe characters which are not agressive toward the Player Character, but who may be toward others.

A "guard" is a typical NPC who will attack any approaching Creature or MOB, but who will ignore Player Characters and their allies.

Back in the early days of on-line gaming called MUD -- Multi User Dungeons -- the term "Mob" derived from shorthand usage to describe a "Mobile" or "Mobile OBject" as opposed to a static object. That object was usually, but not always, a hostile enemy or "monster." Today, those Mobs would be called "Pathers" as they are moving in some computer described, usually repetitive and therefore predictable, path. [1]

Creatures are sorted by the location in which they can be found. Keep in mind that their difficulty and type are also related to each region, just as character progression. This list is sorted by land and then region, the order a character normally encounters those locations.

The color of creature names give a quick indication of the difference between a creature's level compared to the character examining it. Creatures much higher than a player's skill level are prone to deflect or nullify attacks making it more difficult and sometimes impossible to defeat them while aggressive creatures will ignore a character nine or more levels above his own level.

Together with a creature's level, difficulty type determines certain attributes such as morale, power, resistances and mitigations. Normal creatures are easily defeated while Arch-nemesis creatures require planning and cooperation to defeat. The prefix Rare on a difficulty level when hovering the mouse determines if it's a normal enemy or one that spawns at different areas and can be found prowling about. Types range from Swarm and Normal to Arch-nemesis. Combat NPCs aligned with the Free Peoples have an similar difficulty type scale ranging from Swarm to Hero. The difficulty type is revealed by hovering the mouse cursor over a creature or looking at its portrait frame.

See Creatures by Type for all different types.

Creatures are sorted by their Genus and then by Species. There are many different species of creatures wandering around Middle-earth and some are neutral while others are purely evil.