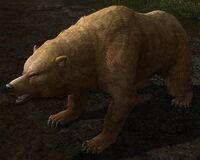 The Bear is the first pet obtained by a Lore-master, at level 1. It has the same level as the Lore-master itself and is summoned with Friend of Bears.

It was originally designed to play the role of a tank, possessing superior durability. These days, it is mostly used in groups for its Shatter Arms skill, which increases the DPS of a group with many ranged and melee damage classes greatly. The bear also has a high personal damage output from auto-attacks.

However, a bear sometimes still can be useful as a tank. A fully traited and fed bear has very high mitigation stats, making it about as survivable as a tanking class. It has more morale and is not affected by dread. The bear's Roaring Challenge copies the threat table and multiplies it with an unknown number, putting the bear on top of the threat list. If needed, Burglar and Champion players can help the bear keep aggro by using aggro transfer skills (Provoke for Burglar; Ebbing Ire for Champion). There are two advantages of using a bear tank above a normal tank in a group setting. The first is that you can fill in the spot in the group that would have been used for a tank with a player of another role, such as DPS, healer or crowd-controller. The second is that, under some circumstances, a bear is more survivable than a player tank due to being immune to specific mechanics. The downside of having a bear tank is that it is hard to control its positioning and movement.

Soloing Lore-masters can use the bear to keep the heat off them. Although Lore-masters are no longer able to transfer threat to the bear with Inner Flame, a strategy of crowd-control and resummoning can be used to keep aggro on the bear: when resummoned, Roaring Challenge is off cooldown.

The bear has the highest flank rate of all the Lore-master's pets (source: https://www.lotro.com/forums/showthread.php?659502-Comprehensive-Pet-Guide).

The last three skills on the Bear's Skill Bar are:

A Bear can eat Pots of Honey & Oats to temporarily increase its combat effectiveness. Pots of Crude Honey and Oats can be bought at any Lore-master class trainer, but higher-level varieties must be crafted by a Cook.