The Army of Angmar is the opposing faction to the Coldfells Army in the Ettenmoors. Monster Players fight for this faction. 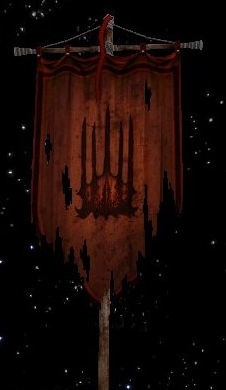 The crude banner of the Angmarim Forces against the night sky.

Led by the foreboding hulk of Akúlhun, the Army of Angmar is determined to bring death and devastation upon the North. The Army mostly consists of Orcs, Uruks, and Trolls, and are allied with the Shadowmaw Wargs, Grimfang Spiders and the Snowreap Goblins of Grothum, creatures of evil all. Despite the name, few Angmarim are now involved in the war in the Ettenmoors, as they have mostly been called to service by the False King.

After coming down from the slopes of Mount Gram, the Army of Angmar established an unbreakable foothold - Gramsfoot. From here, the large host now led by Akúlhun, the War-tyrant and Commander of the Angmarim Forces in the Ettenmoors, slowly plan their next attacks in the never-ending battle to destroy the last remaining defense of the North, the Coldfells Army. Let by Lainedhel, who slowly plans the downfall of the Angmarim host from the ruined fortress of Ost Ringdyr, the army is the only thing left to stop the force's passage to Imladris.

Allied with the enemy are the Hobbits of Hoarhallow, led by their mayor Wat Mudbottom, the Hobbits post a bigger threat than the orcs would like to think. The Morningthaw Bears led by the vengeful Old Goldhead and the noble Sun-touched Eagles led by Golloval also aid the "Free Peoples" in their quest to purge the Ettenmoors. These creatures all give strength to the Coldfells Army's cause, and the Angmarim must deal with them too to fully defeat the defenders.

When Gúrhardron, original War-tyrant and Commander of the attack was sent by Mordirith to the Delving of Frór along with much of the Angmarim part of the army, in an attempt to gain control of the cave system for underground travel, the army needed a new War-tyrant. The feared Akúlhun was chosen to lead the host in his place. Since his arrival at Gramsfoot, bringing many of his feared Krahjarn Tribe, the new commander has focused on maintaining control of the important towers, castles and outposts in the Ettenmoors, and also the important resource supplies. In this way he hopes to have strategic command points situated around the area, to limit the movement of the Free Peoples and to diminish their numbers through constant attacks.

Since Gúrhardron was sent into the Delving of Frór, the Army has been slightly losing ground. The Free Peoples have been growing in number, and the Ettenmoors has been locked in a complete stalemate. The two towers of Lugazag, the West Tower often held by the Angmarim and used to defend or attack Gramsfoot, and Tirith Rhaw, the East Tower often held by the Free Peoples and used to defend or attack the strong Coldfells fortresses of Glan Vraig and Ost Ringdyr. The strategically important castle on the island of Hoardale, Tol Ascarnen, changes hands often. The Grimwood Lumber Camp and the Isendeep Mine provide necessary materials for whichever side holds them, and they too are hotly contested for their valuable supplies.

Despite all the sieges they withstand, Angmar constantly cling on to three permanent bases: the Orc-camp situated deep into Enemy territory, the unattackable base of Gramsfoot and the strong fortress of Dâr-gazag. Here, himself a former War-tyrant, Durgrat, second-in-command to Akúlhun, holds fast in this proud fortress. From here the army prepares another attack, gathering its strength for the big push to come...

How Do I Join The Army?

So, maggot, you want for fight for Angmar do you? Well you'd best listen carefully, or it's back to the slave pits in Carn Dûm for you, slug!
First thing you're going to have to do is to gain experience. We don't like our recruits fresh, and if we can find no use for them we'll send them out to kill some leeches! Some worms like you couldn't kill one of the rat-folk!
To join the Army, first you'll have to have at least one Free Peoples character of at least level 10
You say you have experience? Excellent. Maybe you can kill some leeches for us. First you'll need to decide how you're going to fight for us.
Next you must choose a Class.
So you've chosen a way to fight have you, worm? Well then next you'll want a name for yourself. Maybe even a runt like you can inspire terror in the hearts of the Enemy at the mere mention of a name...
Now you'll have to choose a name. Just like the Free Peoples this must not be offensive in any way. The name must be unique and preferably lore-appropriate.
So, you have a name do you? That's nice, because to me you'll always be worm!
Once you've created an acceptable name, you can create your monster. Once you have done this, you will find yourself in the Gramsfoot, in an area depending on your race, with race-compatible Trainers, Barterers and Corruptors.
Ahh, worm, you've turned up. Good, maybe I wont send you to the slave-pits just yet... Now listen carefully.
Follow the introduction quests and do as they say. Pay close attention to them as they will teach you a little of Monster Play.
So you've followed the orders then, maggot? Good. You now look near fit enough to make some rat-folk scared. It's time to unleash you into the service of the Great Eye! Now, follow your orders and kill our enemies, worm. I want to see you sending târks running from their holes!
You're now ready to play as a Monster Player. For further advice, explore the Monster Play content here. Good luck fighting our common enemy!

In descending order of power