Yule: The Battle at Frostbluff 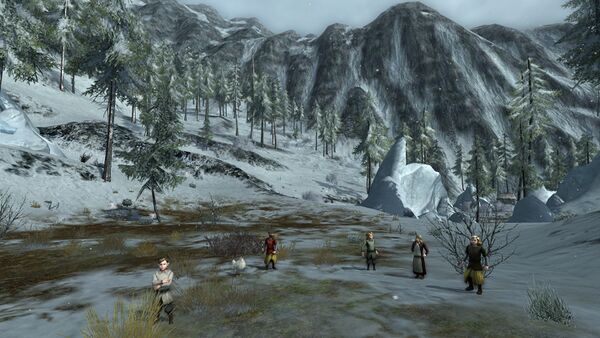 "A fierce cold has come down from the mountains threatening the games the children of Winterhome are playing in the fields!"

This instance is similar in style to a skirmish in that it includes banners and encounters and the instance can be run at different group sizes. However, there is only one tier of difficulty, no marks are awarded and the encounters are optional providing no benefit other than for completing a deed.

The instance takes place in Frostbluff and is accessible through the Instance Finder.

Two random encounters will appear during the course of the instance, during the fights for the second and third control points, respectively. They can be any two of the following:

This is a traditional offensive skirmish, in which you move between control points, claiming each one in turn.

After talking with the children and the "Queen of Cluckland" (a chicken) at the start, head east to the first control point, Grumpwood Tower. [12.8N, 94.3W] It will initially appear unpopulated except for a scattering of inanimate snowmen, but when you approach, random individual snowmen will turn into Cold Grims and Cold Wisps. Once these are cleared, the fire in the middle of the fort will ignite (good for removing effects like Persistent Cold), and you will need to fight off two counterattacks before claiming the control point banner.

Note that the first and second control points (but not the third) both have a large area debuff:

Next, head southeast, past the Grumpwood Tower, to reach the third control point, Frostlake Fortress. [12.7N, 93.4W] Just past the Grumpwood Tower, watch out for a line of snowmen that will spawn grims. The fight at Frostlake Fortress is similar to the last two fights, except there are two bosses: the Haunting Cold is in the initial group of mobs, and the Shivering Maelstrom appears in the fourth and final counterattack. Encounter 2 will appear on the nearby slope to the north [13.0N, 93.6W] at the start of the third counterattack.

In all three forts you will find snow piles which can be looted for Perfect Snowballs. Throwing these at mobs will give them a moderate debuff:

► Yule: The Battle at Frostbluff Mobs

Loot for this instance comes generally from daily quests, however, there is a Frosted Chest at the end that awards 5 Festivity Tokens. There is a different chest for each group size, the locks of which reset daily at 3 A.M. /servertime and are not shared between the different fellowship sizes for a possible 20 tokens daily per character.

Some people find that the chest for 2 and the 3 persons has the same lock, reducing the potential max number of Festivity Tokens. 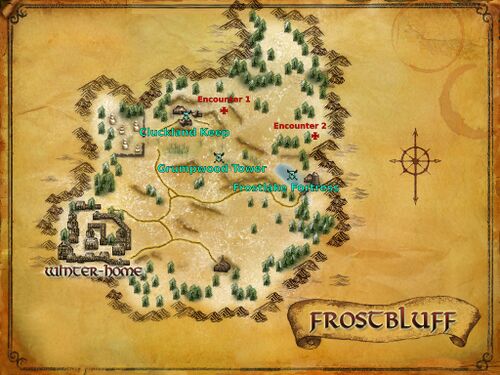