From Lotro-Wiki.com
Jump to navigation Jump to search
These stats are for Tier 1,
click here for Tier 2.
Advanced Stats
Alignment: ( Evil )

These stats are for Tier 2,
click here for Tier 1.
Advanced Stats
Alignment: ( Evil )

Thorog, once known as Thorog of the North, was the brother of the even mightier Hrímil and likewise a great Dragon of the First Age who maintained a certain enmity with the Dwarves up until the early Third Age.

In the Elder Days, Thorog had served Morgoth under the command of his principal lieutenant, Sauron. Following a pact between the Greymaul Dwarves and his masters, the Dragon was sent as part of a large army in a seeming attempt to reinforce these new allies against the Longbeards. However, at a preordained signal, Sauron's host turned upon Mótsog's rebels, intent on destroying both him and Durin; many Dwarven-warriors perished then at the hands of Thorog's claws during the Sunder-battle of Biriz-zahar. In the end, the Greymauls and Longbeards banded together against the common foe and pushed back the forces of the Enemy, with the Dragon counted among those who escaped their wrath. Following the end of the First Age, Thorog passed out of all knowledge. Until the Third Age, when the wealth of Helegrod attracted him there; wishing to claim all the riches for himself, the greedy Thorog descended upon the Dwarves and so slew their king, Durin V, only to be himself mortally-wounded. This only furthered the hatred his sister, Hrímil, reserved for the Longbeards. Long after Thorog's demise, his old commander, Sauron, had sought means to return him to his service and also punish the insolence of Hrímil: at Sauron's bidding, the Gaunt-man Drugoth the Death-monger of Angmar had succeeded in resurrecting Thorog. But interference resulted in the Dark Lord's minion losing control of the fell spirit within the Dragon. Finally, the undead Thorog was defeated yet again and vanquished forever.

Thorog was once a great dragon, the brother of Hrímil Frost-heart, and has now been resurrected by Fell spirits that do the bidding of Drugoth the Death-monger. He slew and was slain in turn by Durin V at Helegrod. In the First Age, he was known as Thorog of the North and survived the Sunder-battle at Biriz-zahar. 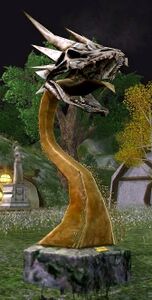 Trophy: The Skull of Thorog

Thorog makes his first appearance in the quest Instance: Fire and Ice and afterwards awaits challengers inside the 24-man raid instance Helegrod: Dragon Wing in the Misty Mountains. For strategies concerning this encounter, see here.

Gift of the Spirit Cast by Servant of Thorog