The Lord of the Rings Online: War of Three Peaks

This page is about the LOTRO expansion. For the area within Elderslade, see The War of Three Peaks.

Index to all News postings 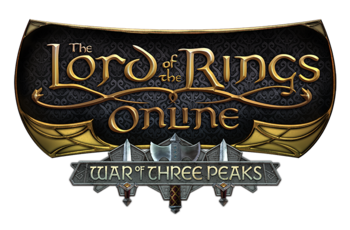 The Eighth Expansion to The Lord of the Rings Online MMO: War of Three Peaks

Standing Stone Games (SSG) announced the release of the War of Three Peaks expansion - the pre-order information can be found here at the Lotro Store. Scheduled to be released at 1:00pm on October 20th, 2020. There are 3 levels of purchase!

•• One per account. Items will be delivered on the first server and character that you log into the game with after your purchase. You may need to log out of the game and back in before the changes take effect on your account.

Prince Durin, son of King Thorin Stonehelm, leads his armies to reclaim Gundabad, the Mountain-home of his people! As the Longbeards, Zhélruka, and Stout-axes assemble to lay siege to the great fortress, Orcs led by Gorgar the Ruthless, son of Bolg and brother of Mazog, meet them in battle -- the War of Three Peaks begins!

Elderslade: Missions Prince Durin Stonehelmson of the Longbeards has declared his intention to retake Gundabad for the dwarves! He needs heroes like you to aid in the war effort if there is any hope of succeeding against the Orc army. Missions are a new way for one or two people to play together, and supports players at multiple levels of the game! Available between levels 20 and 130, earn loot, motes, and much more!

New Six Person Instance: Shakalush, the Stair Battle It is on the stairs of Bagûd-mekhem, the Gate of Winds, that a decisive battle of the War of Three Peaks is to be fought. There, caught between those loyal to Gorgar the Ruthless and Hrímil Frost-heart, the Gabil'akkâ hope to deal a devastating blow to both of these forces in a single stroke.

New Raid: Amdân Dammul, the Bloody Threshold The final battle of the War of Three Peaks has begun. Prince Durin Stonehelmson of the Longbeards leads the Gabil'akkâ , a great host of united dwarves, to the very gates of Mount Gundabad. But Gorgar the Ruthless, son of Bolg, has one last surprise in store for those who would seek to usurp him....