The Battle of Lórien 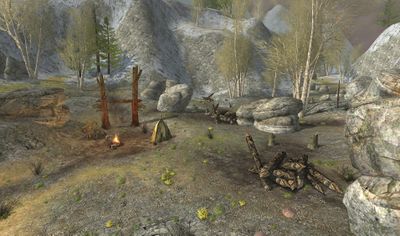 "The Orcs of Moria have come down from the mountains, and as they launch their attack on Lothlórien, Elf and Elf-friend alike must stand against them, or perish..."

The Battle of Lórien is a fellowship-size quest instance taking place in the Fanuidhol area of Lothlórien, northwest of Caras Galadhon. Players must defend three passes from invading Orcs and at the same time destroy idols at four enemy encampments within a certain time limit. By completing the instance and optional objectives, players can receive, among other rewards, reputation with the Galadhrim, Lothlórien Gold Leaves, titles and LOTRO Points.

While the instance is set in Fanuidhol, all players must speak to Belvagor [16.1S, 67.0W] inside the entrance of Caras Galadhon to enter the instance.

► The Battle of Lórien Deeds

The instance is set up such that the fellowship must simultaneously defend three passes from waves of marauding Orcs with the help of Galadhrim Elves and destroy idols at four Orc encampments northwest of the passes. In addition, there are optional objectives to complete for additional rewards such as defeating Narshpug and Grakâmâb, completing the instance within 30 minutes or completing the instance without letting Belvagor taking any damage.

At the outset, players must first talk to Belvagor then assess the strength and composition of defending forces at the three passes and assign the Elf-champion, the Elf-bowmaster and Belvagor himself, to defend a pass. As soon as each of the NPCs are assigned to a pass, the battle begins and waves of Orcs begin to assault.

If any of the Passes are under attack (Northern, Eastern and Western) on screen text will appear. "The Orcs are moving on the Eastern Pass!" if defended "The Eastern Pass has been defended!"

Barterers Bainien [16.1S, 67.0W] and Isdúr [15.8S, 67.9W] in Caras Galadhon will trade items used for assisting defending NPCs within the instance for

In order to achieve victory, the fellowship must clear four Orc encampments and destroy the idols there. In order for the idols to be vulnerable, players must first defeat the defending Orcs and bring a Banner of Lórien to the idol. Banners are found at the beginning of the instance, at each of the passes and at camps of previously destroyed idols. The player holding the Banner of Lórien can still attack, but they cannot use skills requiring an induction. If the idol is not destroyed in a certain amount of time, the Orcs respawn and must be defeated again to continue damaging the idol.

In addition, there are patrolling Orcs and Orc encampments in Fanuidhol that do not contain idols and need not be disturbed. However, some optional objectives require that the fellowship dispatch Narshpug and Grakâmâb which spawn at random camps and leave the battlefield after a certain amount of time.

If the fellowship succeeds in destroying four idols within 45 minutes, the battle is won.

► The Battle of Lórien Mobs 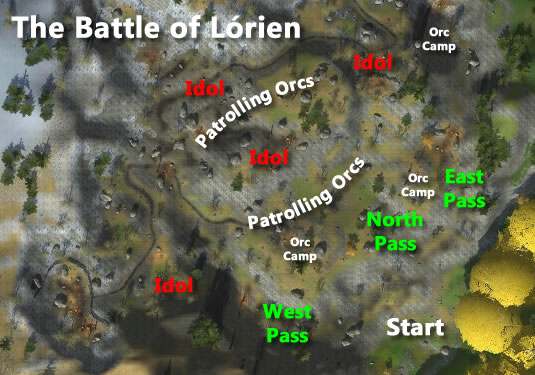