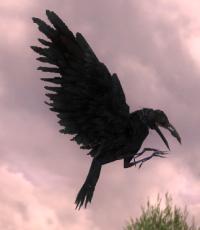 The Raven is the second pet obtained by a Lore-master, at level 15. It has the same level as the Lore-master itself and is summoned by Raven-lore.

It is a versatile pet with a reasonable survivability. The raven is good for increasing global group DPS if a lot of fire damage is being used (e.g. rune-keepers, hunters with fire-oil or lore-masters traited down the Master of Nature's Fury line). The raven is also good for reducing the damage taken by your fellowship: through Shield of the Raven's Wing for fights with a lot of tactical damage, and through Dizzy for enemies which deal heavy melee or ranged damage. Ranged mobs can be made harmless through use of Distraction in combination with Wind-lore, forcing them to come in melee range. In solo situations the raven increases the damage of the lore-master itself.

The raven has the third highest flank rate (after Bog-guardian and Eagle).

The last three skills on the Raven's Skill Bar are: