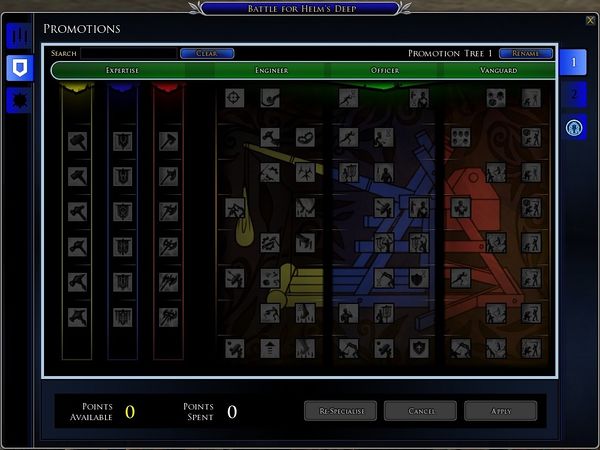 The Promotions panel contains your options for advancing and customizing your character for the new gameplay and mechanics found within the Epic Battles. Completing objectives within Epic Battles earns you Promotion Points, based upon the level of the highest Lifetime Medal you have earned for each quest. The number of Promotion Points is determined by the highest award earned:

Each character starts with 4 free promotion points. An additional 396 points can be earned, which requires you to achieve a Platinum award on every quest across every instance size (Solo/Duo, Small Fellowship (3 man), Fellowship (6 man) and Raid (12 man)). Gaining Platinum on all Solo/Duo quests will earn you 176 Promotion Points, plus the 4 free ones brings you to 180. Upto 50 Promotion Points can be purchased in the Lotro Store.

Promotion Points can be distributed across the Engineer, Officer, or Vanguard roles. Each affects and improves your ability to interact with different portions of the battlefield. The cost of improving each trait increases the further down the trait tree you progress.

You can save two different Trait trees; additional save configurations can be purchased with Mithril Coins.