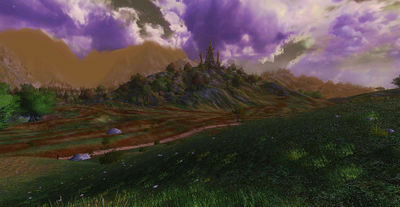 The rolling hills of Nan Laeglin are home to the Uch-lûth (the Ox-clan) and the now extinct Turch-lûth (Boar-clan). The Uch-lûth village of Lhanuch sits upon a hill at the center of the region, and not far to the south-west is the great ruin of Harndirion, a massive tower from the elder days when Gondor stretched from its current realm all the way to Arnor in the north.

The Grey Company travelled through the area on their journey south.

Nan Laeglin features a story-based instance which culminates in the success or failure of the Grey Company’s efforts in Lhanuch.

An emissary of Isengard has come to Lhanuch, attempting to sway the Uch-lûth to join the Dunlending campaign against the Rohirrim in the South, prompting the Rangers of the Grey Company to send an ambassador of their own to the surviving Algraig clan in order to circumvent Saruman’s plans. The Uch-lûth are under siege by Wargs and half-orcs in the service of the brigand-lord Sharkey, though the Uch-lûth do not yet understand that Sharkey is, in fact, the wizard Saruman.

Though for the moment, the Uch-lûth remain neutral in the strife between Dunland and Rohan, outcast to their brethren in the South, they have no love for the Horse-lords and might be swayed to join the ranks of Dunland if the Grey Company fail to dissuade them.

For information about NPC's and Services see Lhanuch, they can all be found there.