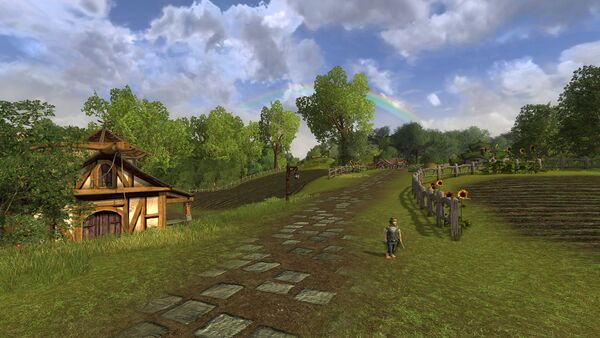 The Great East Road (also known as the East Road or the East-West Road) was an ancient Dwarven route passing from western Beleriand, over the Ered Luin, through what later became The Shire, through lands that would become Arnor, and to the Misty Mountains. Travellers could cross the Misty Mountains by using the High Pass, and continue their journey to the distant dwarven lands in the East by using the Old Forest Road through Mirkwood.

In the Third Age, the Great East Road stretched from the Grey Havens, through The Shire, through Bree to Rivendell and over the Misty Mountains through Mirkwood to the Iron Hills.

The Great East Road was originally laid by the dwarves during the First Age before the first rising of the Sun, probably during the last Age of Stars, and ran from the Iron Hills through Rhovanion to Khazad-Dûm, from which it continued across Eriador to the Ered Luin, and then on into Doriath in Beleriand. The western parts were built to facilitate the passage of companies of dwarf craftsmen (and later, their armed escort) across eastern Beleriand, before the Sack of Doriath by the dwarves of Nogrod ended their trade.

After the First Age, and the ruination of Nogrod and neighbouring Belegost, focus shifted to the eastern part of the ancient road, which had been built by the dwarves of Khazad-Dûm in the Misty Mountains. Khazad-Dûm's inhabitants, the Longbeard dwarves, continued to grow in power and influence, and their trading needs meant that the road from the Iron Hills which travelled through Mirkwood to their gates became widely known.

On the western side of the Misty Mountains, after traversing the High Pass, the road continued to the Ered Luin, and this part ultimately became known as the Men-i-Naugrim or "Old Dwarf Road". When the Númenórean realm in exile of Arnor was founded, the Arnorians took over the maintenance of the Men-i-Naugrim, and built several fortresses on or near it (including Weathertop), and expanded or created bridges over the rivers Baranduin (Brandywine) (Bridge of Stonebows) and Mitheithel (Hoarwell) (The Last Bridge). After Arnor was divided in III 861, the Great East Road formed the boundary between two of its successor states, Cardolan and Rhudaur.

By the time of the War of the Ring in the late Third Age, where the Great East Road met the North-South Road (Greenway) lay the ancient village of Bree. A days ride east lay the Forsaken Inn, beyond which lay Rivendell. West of the crossroads the hobbits had colonized The Shire, and their most important towns lay athwart the Great East Road; (Hobbiton and Michel Delving to name two).

After the War of the Ring, sections of the road that ran through The Shire would have been off-limits to Men, under a proclamation of King Elessar.

The article on the Royal Road discusses more roads across the realms of Lotro. 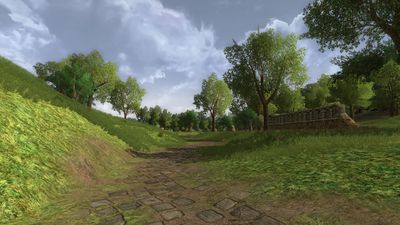 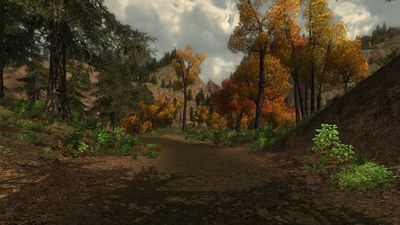