Flight to the Lonely Mountain 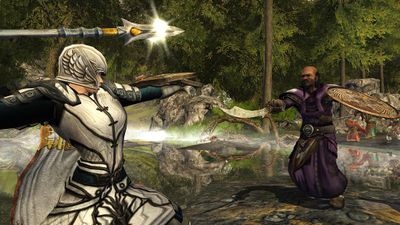 "The Ring has passed beyond my vision into the pass of Cirith Ungol. Dale has fallen in the North, and the survivors of the siege are retreating to the Lonely Mountain, with the Easterling forces not far behind them...."

Flight to the Lonely Mountain is part of the Riders of Rohan instance cluster. It takes place near Erebor and can only be accessed via instance join.

Category Flight to the Lonely Mountain Quests not found

Flight to the Lonely Mountain Deeds

This is a survival raid on a duration timer. The goal is to survive over half a dozen waves of MOBs until the timer bar fills. On T1, waves are triggered by time. On T2, by damage as well.

One of various sets of adds is randomly selected each wave. Anyone who receives the "mark" debuff will be targeted by all the archers (arrow mark overhead) and take very heavy damage. Warriors (sword mark) do AoE damage. Captains (shield mark) have auras boosting damage of others around, which increases when anything is defeated. They may not be CCed. Summoners (sun mark) have CC adaptation. MOBs should be pulled out of green healing puddles.

On T2, challenge comes with another wave if you defeat all of the current wave of adds. Keep three standing until horn blows announcing next wave to not trigger extras. Berserker attacks random targets and comes at different times from waves.

Sets of MOBs include:

Flight to the Lonely Mountain Mobs