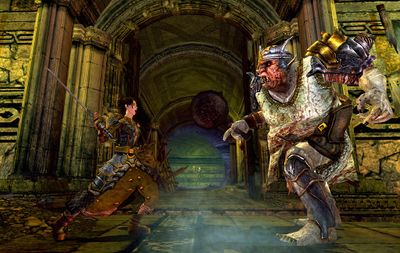 Fil Gashan is the stronghold of Talug, right hand of Mazog, Lord of Moria. Here, the Orc-general musters an army to make a futile assault upon Lothlórien. Here, he also breeds Orc-warriors of a most deadly skill...

This is the location for a level 60, 6-man instance, which is included in the Moria Quest Pack. The entrance to Fil Gashan is located near Hudnul-meden in the southern region of The Flaming Deeps.

The instance is set up such that there are sentries patrolling the area and watching for intruders. If they become alerted, they run to the nearest alarm bell and ring for reinforcements.

Hard mode for Fil Gashan requires the fellowship to sneak past every sentry, assuring that no more than 2 sentries are killed. To do this the fellowship must disguise themselves in uniforms pilfered from Chief Guards on the first floor and Lieutenants on the second. Burglars can also sneak past sentries and by using Share the Fun can also take another fellowship member with them.

All other mobs in the instance are fair game for killing: fighters, skirmishers, chief guards and lieutenants.

Upon entering Fil Gashan, the first sentry watches from his post right in front of the first alarm bell. These sentries must be avoided if the fellowship is to complete challenge mode.

To retrieve the first uniform, pull the mobs behind the sentry back to the front corridor. Soon after a Chief Guard will join the fight. Keep in mind that the first two people to get uniforms should probably be a healer and tank, or a healer and DPS duo, so that they can bring down another chief guard for his uniform.

Once the first person has her Chief Guard's uniform, she can equip it and begin to sneak around and look for the second uniform. Everyone else should wait in the front hallway.

To get to the second uniform, sneak past the alarm bell and take a left down the hallway at the four-way intersection. Find a uniform in a strongbox in the room at the end of the corridor and hand it out to someone at the entrance.

From here, these two people should roam around the first floor (with the exception of the mess hall located north of the crossroads) and spy the layout of the first floor. The Chief Guards and the strongboxes spawn at different locations each time throughout the instance. Find the easiest fight for two people so that they can obtain a third uniform.

A rule of thumb is to try and avoid any fights where there is a roaming Chief Guard. The stationary Chief Guards are less risky to take down, without pulling massive amounts of mobs.

The uniform wearers should go to the locations one at a time. If they walk past a sentry together, they'll fail. One good trick is, when the first person is at the fight location and is waiting for the second uniformed person to arrive, that first person should keep moving around in that little section of the map. This will throw off the guards long enough for the next person to arrive. Make sure there aren't any sentries nearby, or they could get suspicious and ring a bell.

Once the Chief Guard is down and his uniform looted, one person should ferry the wrapped uniform back to the front of the instance and hand it out to one of the patient fellows. The second person can remain behind and look for the next fight.

Continue this process without alerting any of the sentries until everyone has a Chief Guard's uniform.

Everyone should equip their uniforms and walk north, one at a time, through the mess hall to the back, and wait for them to finish eating.

Vrarz the Cook first sends out several adds to take care of the fellowship and after a while will join the fight himself while his remaining adds cheer him on. After a while, his adds will rejoin and the fellowship will have to take down both him and the rest of his adds.

Once Vrarz the Cook is dead, a door opens up on the northwest corner of the room that leads to a hallway. At the end of the hallway, there's a gate with an alert sentry standing in front of an alarm bell. This is the only alarm bell that must be rung during the entire instance. The sentry will summon several guards and a Lieutenant who will drop a new type of uniform that is effective against mobs on the second floor. The Chief Guard uniforms will not work on the second floor.

The trigger for the Captain Class Quest In Harm's Way (Optional) lies in the mess hall, and once it is activated will summon seemingly endless waves of adds that the fellowship must dispatch.

The first person to get a lieutenant's uniform should equip it and head up to the second floor. Running past the first set of mobs and across the mess hall balcony, the player will find himself in another set of corridors and closed rooms containing Lieutenants and strongboxes.

Again, the Lieutenants and strongboxes spawn at random in these rooms, so the basic idea is to find an empty room adjacent to one with a lieutenant in it. Time the patrolling of the sentries so that when they turn the corner and are at their southern-most point on the map, hop out of the room, range-pull the lieutenant and run back toward the waiting fellowship.

Be careful not to get hit or risk losing your disguise making it impossible to run past the other orcs without alerting them. If necessary, jump from the balcony in to the mess hall then attack them with the rest of the fellowship.

A blinding flash or a riddle can incapacitate the lieutenant, preventing him from starting a warband maneuver. Repeat this process until everyone has a Lieutenant uniform but watch out for respawns.

The fellowship should safely sneak their into way to Commander Greb's room, which has its entrance on the eastern side leading to the interior of the corridor.

There are 3 phases to defeating Greb.

Phase 1: Poisoned blades
At the beginning, Greb will pull out his poisoned blade and apply a curable poison to a fellowship member.
Phase 2: Fire Axe
In the second phase he might apply wounds, and he may also gain a buff that will reflect melee damage.
TIP: When he yells "I'll return your puny damange", do *NOT* hit him. Instead, just kite him around the room until this buff wears off.
Phase 3: Final Fight
At about 20k morale, he will call his two Lieutenants to his side and proceed to stun players making them vulnerable to their warband maneuvers. A Lore-master should apply stun protection to everyone to prevent warband maneuvers.

The second boss drops the key to open up a door on the third floor.

Wait for the sentry to path back to the right and once the coast is clear, everyone can jump down to the mess hall with the exception of the key-holder who will proceed across the balcony and back up the stairs and unlock the door at the top. The boss room lies past several sentries and alarm bells.

Once again, General Talug is fought in three phases.

A more in depth breakdown of this fight can be found on the General Talug page.