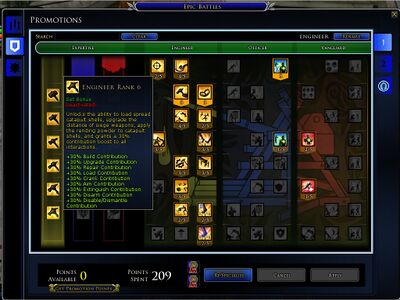 The Engineer is an Epic Battles role which focuses on utilizing interactives and siege equipment within the space to defeat their enemy.

The majority of their promotions focus on improving the efficiency with which they perform their actions and unlocking new options for utilizing and upgrading siege weaponry.

Engineers also gain the ability to place a variety of traps that can damage or hinder opponents.

Large army warfare requires siege weaponry. The Rohirrim are armed with various sizes of catapults and ballistae positioned throughout the fortress of Helm's Deep. Taking command of these weapons, you can choose ammo with which to load them, aim them, crank them, upgrade them, and fire them. If you have an ally with you, they can aid you in any of those actions, or do one of their own. The actions you have available, and the efficiency with which you perform them, can be unlocked and upgraded through the Promotions tab of the Epic Battles panel.

While all characters can operate siege equipment, only the traits available to an Engineer increase their efficiency and potency.

As you gain Promotion Points and spend them on Traits, the bonuses on the left of the Epic Battles panel are activated. As your engineer ranks go up, you receive bonuses and new abilities. At Rank 6, you have all the bonuses for Engineer and can make all modifications to equipment. At Ranks 2,4 and 6, you are able to make modifications at faster speed than before.

Just some basic advice if you're starting out. People will carry you through a few epic battles until you reach enough promotion points to get to Rank 3 Engineer. Although anyone above level 10 can participate in Epic Battles, it's customary to wait until you have your Legendary Weapon, so that would be around level 50. If you're below level 100, focus on Engineer. Make sure banners are healed / repaired, barricades are not on fire (extinguish them) and heal any damaged supplies and soldiers (if your character has healing skills). Anyone in any trait can heal soldiers by commanding the captain to heal them, however, if your fellowship partners are have Officer traits, then let them do it: their healing potency will probably be higher and the cooldown will be shorter.

Catapults need to be built and armoured at least. In some places it's strategic to wait to build equipment until the phase of battle is nearly over, to avoid having to defend all equipment at the same time. Ask if you see equipment in an odd place before you build it. Bear traps are extremely useful: two of them, fully buffed, can kill almost any mob in an epic battle. Tripwires are useful for protecting banners, supplies and for forcing enemies to pause in the target zone of a ballista. This gives the soldiers a longer chance to damage enemies. As you get familiar with the side quests, you will know when it's appropriate to run there, drop a trap, and leave, letting someone else actually complete the side quest.