Castellan Wisdán is the keeper of Barad Gúlaran in Nan Gurth, in Angmar.

He is first seen welcoming Amarthiel, and is a boss in the Barad Gúlaran instance. 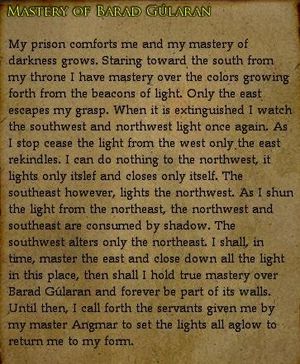 Ignore the torches in the room and have everyone stand on the opposite side of the Castellan's throne. Prepare traps and if a lore-master is present, prepare to root the incoming Gúlaran Warrior that spawn during the fight. This is a tank-n-spank fight.

The Castellan will engage as soon as you come within agro range. Once agroed, dread will increase once every minute so it's recommended that a full fellowship attempt this. Concentrate all dps on him until he falls and then deal with the Gúlaran adds that spawned during the fight. He does not have any major abilities to watch out for, so just beat him down. Keep in mind that once the Castellan is engaged, the doors are locked so make sure everyone is prepared before the initial pull.

Note: It is highly recommended NOT to set the loot rule to Master Looter, as the chest will de-spawn (along with all the loot left in it) after one or two minutes.

"Welcome, welcome to Barad Gúlaran. I wish I could be a more gracious host."
"Sadly, I am bidden by my master to destroy you."
"Shall we begin?"
"My power grows!"