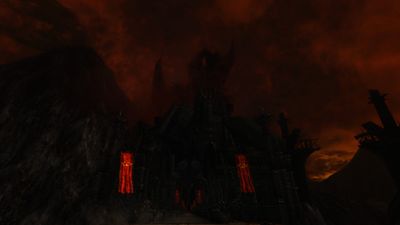 Barad-dûr (Sindarin for Dark Tower, Lugbúrz in Black Speech), is a point of interest within Dor Amarth on the Plateau of Gorgoroth.

Once the great fortress of Sauron in Mordor, the Tower collapsed in its downfall, yet its base remains. The shadow-mantled ruins of Sauron's fortress still bear a twisted splendour.

Barad-dûr was originally built during the Second Age, and leveled after Sauron's defeat in The War of the Last Alliance of Elves and Men.

Barad-dûr fell under siege for seven years by the Last Alliance of Elves and Men during the Second Age, and was leveled after Sauron's defeat at the hands of Isildur, but because it was created using the power of the One Ring, its foundations could not be destroyed completely while the Ring itself still existed. As Isildur failed to destroy the Ring, the tower was eventually re-built when Sauron returned to Mordor thousands of years later.[1] During the Third Age as he regained his power, Sauron had Barad-dûr rebuilt.

Only when Frodo Baggins (with the unwitting aid of Gollum) destroyed the One Ring, the Tower was finally brought down. Without Sauron's power from the Ring to sustain it, it could not stand. The moment the One Ring was cast into the fires of Mount Doom and was unmade, Barad-dûr collapsed into ruin, never to be rebuilt.[2]

Covadil. Loremistress from the House of Lore in Minas Tirith recounts:

'Sauron instructed his servants to build him a kingly castle, a stronghold on a hill that was called Amon Dûr. Over the long passage of years, his servants expanded the castle to cover all of the hill, and it grew with new construction until it towered into the air. It became Barad-dûr, the Dark tower, and reached so high that only Sauron's magic could keep it aloft.
'But the tower did not only reach skyward. Beneath Barad-dûr, the Orcs delved fathomless dungeons for their master, until the Ered Lithui was riddled with pits and chasms. When the tower fell, the land gave way and a great abyss opened where Barad-dûr once stood. Sauron's dungeons were exposed to the sky: the Abyss of Mordath.'
Covadil shivers.
'Brrrr! Knowledge can be frightening! Anyway, Sauron may be gone, but he dwelt at Barad-dûr for so long that the land has not forgotten him. It sounds to me as if he left his impression on the Abyss and the lands around it.' [3]