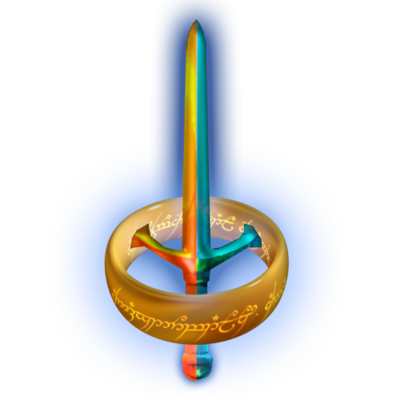 The Allegiance System is an efforts-for-rewards system, as an alternative to the traditional "reputation faction" track. It was initially released with the Mordor Expansion in August of 2017, and then extended in the Gundabad Expansion in November of 2021.

The allegiance panel is accessed through the game's menus, starting with the "chevron" or "caret" at the left end of the tool bar at the bottom of your screen:

this then brings up a list of options, the one you want is "Character", and underneath that is "Allegiances": 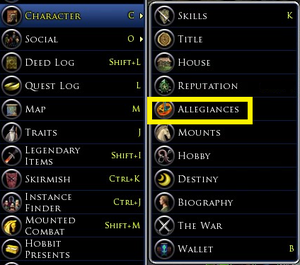 The panel itself looks as follows, with the upper "tab" for the Mordor-expansion allegiances, and the lower one for the Gundabad-expansion (Zhélruka) allegiance: 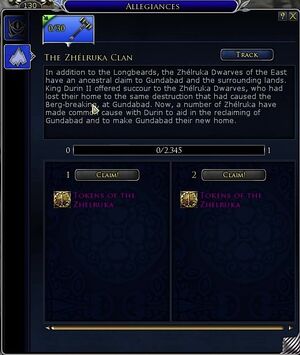 From the main allegiance panel, the "Track" button can be selected, and this will create a persistent on-screen object, which displays a unique symbol for the allegiance, and an indicator of standing level, and progress towards the next level. This object can be repositioned, as desired, using the "Reposition UI" interface, or cancelled, with the "X" in the upper-lefthand corner of the object. The object can also be cancelled via right-click on character portrait, "Toggle UIs", "Allegiance Progress Display".

The initial launch of the Allegiance system (Mordor expansion) used the terminology and some of the UI elements of "reputation". As the game has evolved, however, Allegiance standing has diverged from the "reputation" model, although traces of the old terminology remain. The Allegiance panel is now separate from the Reputation panel. Also, reputation acceleration does not benefit Allegiance "standing" progression.

The Mordor-expansion allegiances consist of:

Access to Mordor-expansion allegiances first becomes available at level 110 and completing Tales of Gorgoroth, rewards are aimed at level 115 players.
There are 30 "standing" levels for each Mordor-expansion allegiance, which are attained by consuming various "Last Alliance" relics, of differing denominations. These are acquired from completing various quests and deeds within Mordor. The standing gain is directed to whichever of the Mordor-expansion allegiance is designated as "active" at the time.
Each of the Mordor-expansion allegiances has a unique storyline, where Chapter 1 of each storyline originates from King Éomer at Udûn Foothold. Completing Chapter 1 of an Allegiance storyline grants a port ability which is unique to that Allegiance, either to Hall Under the Mountain, Hall of the King, Bâr Thorenion (for Hobbits of the Company) or Court of Lothlórien. These ports have a 5-minute cooldown. Beyond Level 1, upon attaining every multiple of 5 allegiance standing levels, a consumable item is awarded, which grants access to another chapter of that allegiance's storyline.
Upon completing a specific sequence of Mordor quests, daily quests for allegiance factions is unlocked. These award additional rewards and barter, including Motes of Enchantment
See Allegiances (Mordor Expansion) for more details.

The Fate of Gundabad expansion introduced a new allegiance -- Zhélruka, one of the Dwarven houses whose personages have previously appeared in the Where Dragons Dwell and War of Three Peaks content. Unlike the Mordor-expansion allegiances, the Zhélruka allegiance is scalable, with a minimum level of 20, and is heavily intertwined with the Missions system.

Unlike reputation factions, accumulating enough points to achieve a particular standing level does not automatically "attain" that level. The level must be "claimed" from the allegiance panel (bottom part, some side-scrolling may be required).

Upon login, if there are levels which are currently unclaimed, the message "You have unclaimed allegiance rewards" appears.