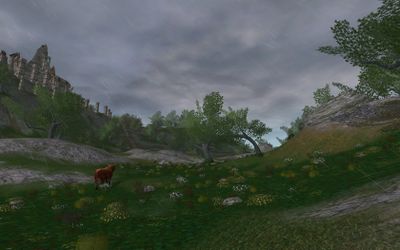 The Windfells is an area in the west of Enedwaith. As soon as you come down from the hills of Fordirith, you will find yourself in a windswept valley, replete with new flowers and trees. On the eastern side of the valley rise the foothills of The Misty Mountains, and on the western side, bluffs leading towards the distant lands of Minhiriath. The North-South Road, which becomes the Greenway in Bree-land, passes through this land, leading north and west into the bluffs. The Windfells serve as grazing lands for the Uch-lûth, one of two clans of Dunlendings derogatorily known as the Algraig – or Outliers – to the inhabitants of southern Dunland.

The Grey Company traveled through the area on their journey south.

At the encampment of a well-familiar Ranger, Saeradan of Bree-land, he and his companions Andreg and Amlan, hidden in the shadow of Amon Mîn, the ruins of a great Gondorian watchtower now claimed by the Draig-lûth, watch the North-South Road.

The goal of Saeradan and his companions is not only to maintain the secrecy of the Grey Company – at the very least of their identity, if not their passage – but also to seek provisions for the continuing southward journey. This seemingly menial task quickly uncovers a terrible mystery involving creatures of Dunlending legend and folklore. The ox and goatherds of the Uch-lûth live in fear of these creatures, looking to the mysterious crone known as the Old Woman of the Mountain for wisdom and protection.

Besides the Draig-lûth, ordinary wolves, and crebain, you will encounter several new creatures in the Windfells, complete with new art and abilities. These creatures are all derived from Welsh folklore to mix in with the overall atmosphere of Enedwaith.