Physical Description: A Fallohide[1] of strong stock; tall and slender, but still with a rounded belly. Fat round cheeks full of merriment greet any passers-by.

Personality Description: Most of the time a cheerful hobbit, a faithful fellow for adventuring or otherwise. Ensuring victory whenever his companions fear defeat through inspiration of song.

Born on Halimath 16, S.R. 1368[2], Meriband is a Hobbit of humble origin. His parents were cooks at the infamous Green Dragon Inn of Bywater (infamous to the residents of the Shire, at least). There he grew up, along the Water during the day and under the spell of minstrels entertaining patrons of the Dragon at night. Dwarves and strange Men both would sometimes come and go along their travels East or West down the road. Each carried tunes of far off lands and treasures innumerable, things of which he liked to never see in his youth, but as he grew his curiosity did also, as it is apt to do. 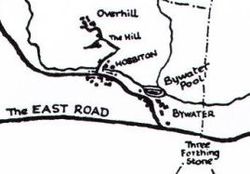 You see, being of the relative same age as several better known residents of the Shire, namely a mister Frodo Baggins, son of Drogo Baggins, and nephew to Bilbo Baggins, the Ring-finder[3], young Meriband was oft to hear tales of adventure from someone he greatly admired, Bilbo himself; and second-hand through Frodo during late night sessions of wonderment among the tall grasses of the Shire. After the departure of Bilbo at his eleventy-first birthday[4] a faint flame began to grow in Meriband's heart, a flame that sought only the life giving oxygen of the open road upon the way to adventure. Many years later, when Frodo, Sam, Merry, Pippin, and Fatty all departed for Bucklebury[5], Meriband too thought he ought to seize the moment and depart on his own grand adventure.

Upon the way he made a stop in the village of Deephallow. He had longed loved the ales of fine taste which he had sampled from there and made it a point on his journey to visit the fabled makers of such draughts. Thereupon he found quite a kinship with the Brewers of Deephallow and quickly joined their ranks. Already a Grand Master Farmer, the arts of brewing came to him as naturally as preparing fourth breakfast. Within the company of Deephallow he found himself getting into great adventure and sometimes greater peril, but always coming out unscathed (for the most part) with the aid of his kin.

Along with the other Brewers of Deephallow he seeks out adventure wherever it may be found, though in times present the growing threat of Angmar has once again stirred even the least warlike creatures of Middle-earth to heroic action. Wherever battle is joined, Meriband will be, to inspire his fellows to new heights of greatness and crush the shadows of the Enemy with songs of inspiration and legend.

His adventures with the Brewers of Deephallow took him to the depths of the world beneath as he delved into the Mines of Moria. Through many dark days he and his kin explored the forbidden depths of magnificent halls long deprived of song and merriment. In these times Meriband dreamed of nothing but the Golden Wood he had heard of only in ballads he did not quite understand and seen only in the imaginings he now recalled. After coming face to face with the abominable Watcher in the Water and escaping the battle alive, Meriband achieved his long held dream of seeing the Golden Wood. He became entranced, enthralled, and utterly helpless to resist the golden boughs and creaking eaves stirred by winds which carried songs from Caras Galadhon. Meriband disappeared into the Golden Wood and was lost to his fellows for many seasons.

Meriband lingered long in the company of the Golden Wood and learned many things, but his visit was overlong and ended as abruptly as it began. He searched for his fellows from Deephallow through the eaves of Mirkwood and to the doors of Dol Guldur itself, but they were not to be found. By way of many adventures he found himself in the realm of Dunland and made the acquaintance of some old friends, long-lost through his days of leisure in the Golden Wood. These friends were the kinship of two great and most well reknowned hobbits, the kinship of Swifty & Hammo. He joined their ranks and quickly began to regain his former self, bringing the songs of the Water and the Golden Wood and the fierceness found in many dark days spent among the Mines, to the gates of Isengard. There the battle has been joined with the wizard Saruman himself, but even he cannot stand against the strength of adventurers united in cause.

He and his kin patiently await news from the south that the roads into the lands of the Horse-lords will soon be open and they may again return to the trail of the Fellowship and hear news of their great journey...

Founding member of the Deephallow Brewers kinship of the Arkenstone world.

Friend of the Swifty & Hammo kinship of the Arkenstone world.

Owner of the home at 2 Cliff Rd, Andir, Cape Of Belafas

Currently rank of Man-at-Arms among the Free Peoples of Middle-earth, achieved thru battle during the conflict in the Ettenmoors.