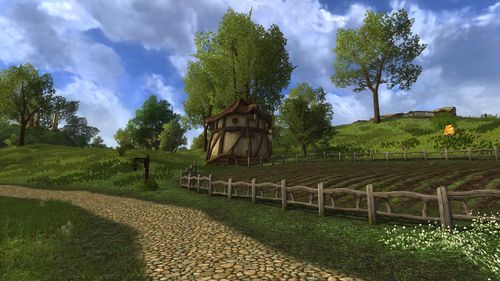 Stock Road is one of the most famous roads in Tolkien's fictional realm of Middle-earth, yet the least talked about. People commonly confuse this historical road with the larger Great East Road which is more to the north.

This is the road Frodo and his fellowship used after he had sold Bag End in an effort to leave the Shire for Buckland and beyond; somewhere close to Woodhall they met Gildor's party, maybe at the Abandoned Elf-camp.

History much later than our LOTRO era, this is the road Frodo will use for his very final journey out of The Shire towards the Grey Havens. Close to Woody End he will meet Elrond and his companions, including old Bilbo Baggins. Together they ride westward to the Grey Havens, where the two Ring-bearers set out on their final journey from Middle-earth.

Stock road runs eastwards from Tuckborough across the Green Hill Country. It passes on through three farthings (the West-, South- and Eastfarthings) before it passes Woodhall and enters the trees above Woody End. From there, it descends in a long northerly loop past the Yale-height to reach Stock on the eastern borders of The Shire, where it merges into the East Road. [1]

In LOTRO a new Hobbit begins his adventures at this very road with an upset Bounder Boffin. Briefly Frodo and his friends appear before some Black Riders show up and the story begins.