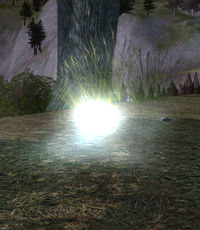 The Spirit of Nature becomes available to a Lore-master at level 40. It is three levels higher than the Lore-master itself.

It was designed as a true healing pet, lacking auto-attacks (and therefore having no flanks from auto-attacks). One of its skills grants a flank event, though. Another skill puts a debuff on the target that reflects a small percentage of damage one deals as morale, much like a weaker version of a Captain's Revealing Mark. This can be kept up fifty percent of the time, granted it not resisted. The last skill of the Spirit of Nature is an AoE heal. Enemies in the vicinity of the Spirit of Nature will suffer a miss chance debuff. The pet can be useful in situations where much common damage is taken, especially if many people get hit.

The Spirit of Nature has no flank rate at all. Instead, it has a skill that forces a flank event.

The last three skills on the Spirit of Nature's Skill Bar are:

This pet does not have any auto-attacks and is thus the only pet that cannot activate Flanked! or Harried! on an enemy target. It does not cause any other special effects either.

A Spirit of Nature cannot eat. There is thus no food to make it stronger.