With the release of Riders of Rohan, a new game-technology called "Open Tapping" is available for all Mobs on the Plains of Rohan.
When a Mob has Open Tapping enabled, by definition it will also have Remote Looting enabled.

This ensures that while charging across the plains of Rohan on your War-steed, you won't have to stop, turn around, and go back to find the corpse, hiding in the tall grass, of the goblin you just killed. This system means that you no longer need to "use" a Mob corpse to collect your loot.

Loot will be generated for each player who contributes to a kill.

What exactly does that mean though? 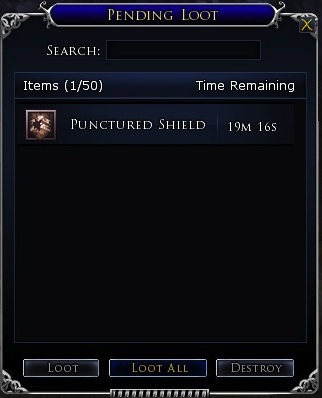 Loot from Remote Looting can be sent directly to your inventory or put into a Pending Loot bag for you to go through later .

Options/UI Settings - Misc, near the very bottom - This option is disabled by default.

Items received from the Remote Looting of Mobs can go into a Pending Loot list.

There is a new UI panel to organize and handle this Pending Loot list.

These items are the spoils of your victory, but are not available to you for use until you have Looted (claimed) them from the Pending Loot list.

is the Pending Loot Icon. It will appear in your "Alerts" panel. Clicking on it will open the window, and display its contents.

One trick to use when you only have three bags, is to take advantage of the pending loot to get the equivalent of 3 1/3 extra bags!

First, you have to force loot to go into the pending loot. So, unstack some of you stacked potions, for instance, so that all of your inventory slots are occupied.

Now, mob loot will go into pending loot, where up to 50 item stacks will remain for up to an hour.

If you harvest a resource node, and get a message about not being able to take the items, you will need to stack up some of those unstacked items to make room for the new resources.

If you collect a sort of quest item that goes in the inventory, it will go into an overflow area until you make room in the regular inventory.

When you complete a quest, you will need to open up enough slots to hold all the items you will get, even if some of them stack and leave you with empty slots. Just fill those by unstacking your potions again.

You do need to watch for quest start items going into your pending loot. For instance, the Iron Collar that starts the Collared quest is a unique item, so only the first one will go into your inventory, but pending loot does not check for this uniqueness, so you can end up with one for every wolf you kill, until you extract one from pending loot and start the Collared quest. Similarly, in the Lone-lands, you can collect multiple Polished Pendants dropped by goblins and Tarnished Necklaces dropped by half-orcs.