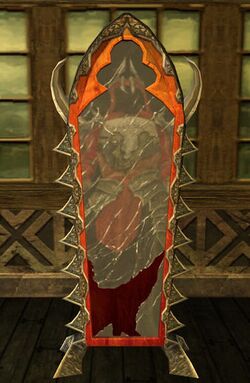 Before engaging, pop a hope token and use Dwarf-endurance. A huge factor in this fight is being able to conserve power. Use all blue on the CJ if you can.

The fight starts off and you are attacking Mordirith. He has a nasty knock around move that will launch you approximately 2/3 of the length of the platform you are fighting on. Make sure your back isn't facing the fire and you have good distance behind you. He can reset if he goes beyond the second row of pillars, so it may help to keep your backs to the side wall of his chamber. After taking down about 1/4 of his life a wave of mobs will spawn. The first set is 8 putrid hands with about 1.5k morale. These are generaly weak and you shouldn't have any trouble fighting them. If you need to, CC the last one to combat rez or rest to full. After the last one is dead, a wave of Mordirith will spawn. They all have 90 morale so just use AoE to reveal the real Mordirith. After about 1/2 life is gone 4 trolls will spawn. These have nasty AoE so keep support classes and hunters back. These also have the knock around abilities so make sure you dont get thrown in the fire. CC the last one if needed to rest and rez. Another wave of Mordirith will spawn, use AoE again and then continue the fight on Mordirith. When he is about 1/4 of his life left, two giants will spawn. These aren't too bad but they will knock you around as well. Fear and CC the second one while you focus on the main one. Mez the last one for a while to recharge power/morale and reset timers. After another wave of Mordirith, you will eventually get him down to about 10% life and he will go green. A giant pillar of light will come from the floor inducing dread, and Mordirith will now be back to full, on his second form. He no longer will punt you around, so the chance of him resetting is much less likely. Just don't go near that big dread eye on the floor! He calls in other Mordiriths throughout the fight, but they are really weak and AoE will knock them out in one hit. Power reserves might be quite low at this point, but auto-attacks can still wear him down. A Lore-master or blue conjunction can be very helpful here.

At 36k morale left, he will start spawning Fallen Spirits. They all have 10k morale a piece. Either keep the spirits mez/CC and muscle your way through Mordirith throwing everything you have at him, or try to take down the spirits one by one and then focus on the boss. Eventually he will stop summoning them. During this time he will use his hope removal a lot. If the tank has his hope taken away someone should be ready to pop a token and the minstrel ready to cure. The tank will only have about 1300 total morale with all the dread, so abilities like Guardian's Pledge and Warrior's Heart, along with Endurance of Stone work wonders here. Minstrels can use Song of the Hopeful Heart to keep the dread down. If the tank does fall get him up ASAP. After Mordirith is defeated loot and hope for some decent treasure!

Conserve power and having a token order is the key. Add hope as soon as it gets taken away. Also, make sure you don't get punted into the fire!