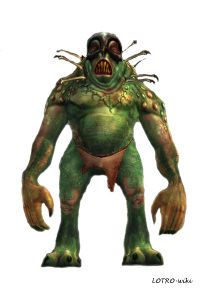 A race of monstrous scavengers, Kergrim haunt the tombs and barrows of Middle-earth, feeding on the dead and on unwary adventurers. The exact nature and origins of the Kergrim are not known. Their fearsome size and appearance point to them being a possible offshoot of the race of Trolls. Their burrowing claws and rodent-like teeth resemble those of the Nameless Things that gnaw at the roots of the earth. It is possible the Kergrim are some strange hybrid of both creatures or simply one of many subterranean species from the deep places of the world. Lacking further information, the people of Middle-earth define Kergrim simply as "beasts." But far from being dumb animals, the Kergrim seem to possess some level of intelligence and are dangerous foes.

Several breeds of Kergrim are known to exist. The Kergrim of Evendim are green and amphibious in appearance, seemingly adapted to the partially flooded tombs reclaimed by the lake. The Kergrim found in the Morgul Vale, Gundabad, and other locales have fearsome skull-like faces and claws formed from sharp bones protruding from their skin. Both types of Kergrim share a desire to feast upon the dead but they are not above hunting living prey that crosses their path.

Kergrim are found wherever there are ancient tombs, in places such as Men Erain in Evendim, the Barrow-downs in Bree-land, and the Skumfil instance in Moria. They are classified as "normal" and are always aggressive. They are weak to Fire damage and resistant to Cries.

Kergrim were created for The Lord of the Rings Online. They were inspired by British legends of a ghoul that haunts churchyards and gravesites. Also known as Kyrkogrim or Church Grims, the mythical Kergrim usually take the form of spectral animals (frequently dogs) that were buried as a sacrifice beneath a church. Kergrim do not appear in the works of J.R.R. Tolkien.

A listing of known sightings from survivors of the encounters: