Helchgam is a boss encountered within the Carn Dûm Sewers. He is the source of the water's corruption. He gives +4 dread. The sewers can be reached by going west from the instance portal, down into a swampy area with huts. The Iron Grate Key unlocks a door that leads directly to the sewers and the western tower, or they can be reached by defeating Urro and entering the cave behind him.

The Helchgam encounter was changed in Book 14 and became more time-consuming. Taking Helchgam without a Lore-master is very difficult.

To spawn Helchgam, you must kill 3 groups of 2 tentacles around his pool. The tentacles are stationary and use a ranged attack. If you are coming from the direction of Urro, you may have to kill several Morroval Elite Masters to reach the pool, but they are not required to spawn him. When all the tentacles are dead, Helchgam surfaces.

Helchgam is in the center of the pool and cannot be reached by attacks. Surrounding the room are 4 pillars, each with 2 groups of tentacles by them. To reach Helchgam, you must defeat all of the tentacles by a pillar. Helchgam will then pull the pillar down into the water, forming a bridge straight to his head. The fellowship can stand on the pillar to damage Helchgam at this point. After the fellowship does 12k of damage, the pillar will start shaking and collapse into the water after a few seconds. Anyone on the pillar must be off it before it falls into the water, or they will die, so it is important to run back as soon as the pillar starts shaking.

Repeat the process of killing tentacles and knocking down pillars until all 4 pillars are down and Helchgam is dead. 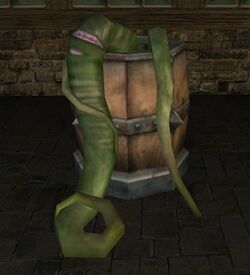