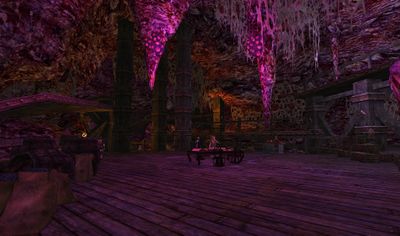 Located in the western end of the Foundations of Stone, not far south of the tunnels to Nud-melek and the Redhorn Lodes, this camp of the Free Peoples is easy to miss if you rush by. Do not risk the darker, eastern end of the region, however, until you find this safe haven. You may have need to return to it often.

Look up. Watch for a road that splits from the downward-sloping cavern floor and climbs toward the cave ceiling. At the end of that path, atop a plateau guarded by Elf-archers, hunkers the Shadowed Refuge. Stretching high and safe over the Orcs and spiders that riddle the tunnels below, this retreat is a temporary home for those hardy and curious souls who have taken it upon themselves to make sure the perils and plagues of the Foundations of Stone do not ruin the larger attempts to restore Khazad-dûm.

The refuge is built among ancient scaffolds left behind by the dwarf-masons of the past. Here you will find the region’s only Stable-master, as well as a Forge-master and Relic-master, traders, and a handful of determined folk with grand plans for this horrible place. Seek them out, especially those knowledgeable Elves hiding in the Refuge’s cave, so that you may take part in their missions to dilute the darkness here. [1]

List of NPCs that are found within this area: 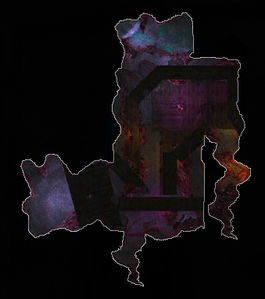