From Lotro-Wiki.com
Jump to navigation Jump to search
These stats are for Tier 1,
click here for Tier 2.
Advanced Stats
Alignment: ( Evil )

These stats are for Tier 2,
click here for Tier 1.
Advanced Stats
Alignment: ( Evil )

Gortheron (Sindarin for Horror-lord or Dead-lord) can be found within the raid Ost Dunhoth in Enedwaith. He is the last boss of the instance.

At T2, Gortheron will have the following effect:

Gortheron's Power - 1 This effect automatically tiers up to a maximum of tier 50. Each tier adds 10% melee, ranged and tactical damage.

During the fight, Gortheron will call adds from the different Medallions of the North instances (first from Northcotton Farm, then from Stoneheight, Lost Temple and lastly from Sâri-surma). Fallen adds will spawn continuously until Gortheron reaches a certain morale level and calls the next group of adds.

On T1, a tank-and-spank tactic should be sufficient.

On T2, Gortheron has the special ability

Gortheron's Power - 1, which makes him and his adds hit with increased melee, ranged and tactical damage. If nothing is done, this effect can increase to +500% of each damage type. Killing adds makes the effect tier down.

T2 leaves the choice to one of the following tactics:

"I toy with you no longer! This final gate will release the nightmares of the Black Land."
"What will save you from them? The Wizards? Speak not to me of Wizards."
"Two have abandoned you for distant lands; they care not for your pains."
"The third spends his days idly in the wilderness; he cares more for animals than free folk." 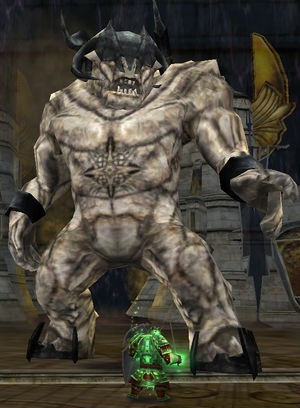 In the final fight in the last chamber of Ost Dunhoth, Gortheron takes the form of an olog-hai, until Gandalf the White arrives to break his powers.