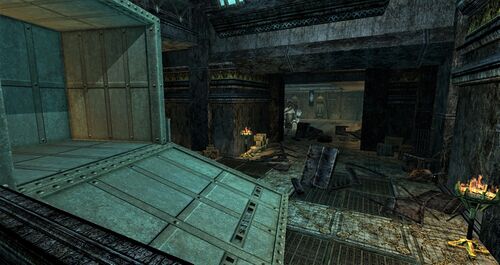 "A brave band of adventurers...think you that this drain is long-abandoned? You cannot imagine what lies ahead."

Dargnákh Unleashed is a level 75 three-person instance in Nan Curunír. Players must have Instance Cluster: Isengard unlocked to enter and complete the deed Discovery: Instances of Isengard by visiting the Ox-clan Merchant Camp in northeast Nan Curunír [79.9S, 0.4E].

Phase 1: As you enter the area, you will be above Dargnákh and unable to damage him directly. Small trash mobs will attack and respawn until the area is cleared. There is a pile of Balistae bolts that need to picked up and moved to the balistae. It then can be fired to drive Dargnákh in a rage. After several shots, he is driven into a rage and breaks into the next area.

Phase 2: Same mechanics as phase one, however you are on the same level as Dargnákh and he can kill you. More trash mobs that attack the fellowship and Dargnákh. A lit torch is on the wall, it needs to be picked up and brought to the various explosive barrels around the room. Ignite the barrels closest to Dargnákh, and he will eventually break free into the next room.

Phase 3: Involves freeing Dargnákh from the sorcerers. Dargnákh is not involved in this phase. Huva spawns adds and does shadow DoT and corruptions. It is a normal tank-and-burn-down encounter. Be sure to loot the chest.

Phase 4: Involves 'encouraging' Dargnákh to follow you to the next room. A small group of mobs will spawn, one of which will be a Butcher. Once the butcher dies, he will drop a slop bucket. One member, preferable the DPS, needs to run the slop bucket down the corridor to the glowing wall section on the left. When you reach it with the bucket, Dargnákh will break through. Repeat this pattern until Dargnákh makes it to the final location.

Note: If you wipe on Dargnákh, there is a shortcut portal at the respawn area that will put you near then end and save you some walking time.

Phase 5: Dargnákh is not happy. Tank needs to hold Dargnákh and healer and dps need to keep clear, he has a very large AoE that does massive damage. There are two strategies to this fight, both involve separate deeds (T1 and T2)