The Chronicle of Events allows you to replay certain Session Play quests in the Epic Quest line, once per day.

In Session Play, you are a "witness to history" -- a participant through the eyes and ears of another -- a contemporary of the event being related.

A Reflecting Pool is an object that allows player characters to access Quest Instances which they have already completed. This allows them to relive past quest experiences or to assist their fellows in order to help them complete certain quests. 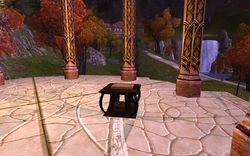 Chronicle of Events, on the Spire of Meeting, in Rivendell

The Chronicle of Events is a tome found atop the Spire of Meeting in Rivendell. [29.9S, 4.8W]

In this tome are recorded many tales of Middle-earth, from many perspectives and from many lands.