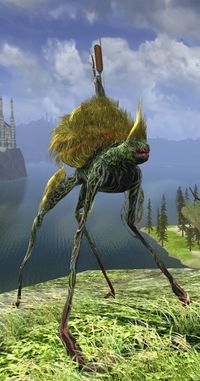 The Bog-guardian becomes available to a Lore-master at level 20. It is one level higher than the Lore-master and is summoned with Friend of Nature.

It has a high survivability due to its high morale and high level. It also deals high auto-attack damage, even though this is common damage. Moreover, it is the only pet that is ranged. The bog-guardian has the ability to deal a damage over time ranged attack. It also has the ability to apply an increased incoming ranged critical chance debuff on a target. This can be useful in a fellowship with a lot of Hunters, although the bear with its Shatter Arms debuff might in some cases be a better choice (more on this topic here). In either case, this debuff is useful for the bog-guardian itself. It also has a skill that has a chance to pull off Fellowship Maneuvers. The bog-guardian is a good pet for difficult solo situations due to its high damage, survivability and flank rate. It can temporarily take the role of tank and keep the Lore-master's morale and power up with its many flanks.

The bog-guardian has the second highest flank rate, after the Bear.

The last three skills on the Bog-guardian's Skill Bar are:

A Lore-master has the ability to learn skills that change the appearance of his/her pet by consuming talismans. These talismans are crafted by Jewellers or can be purchased at the LOTRO Store.