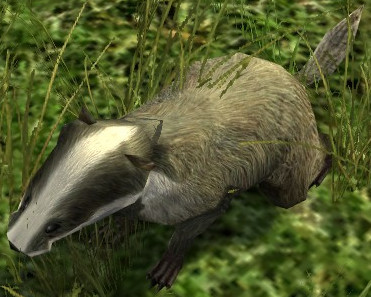 Badgers are a species of Beast.

Badgers are small, stocky creatures with short, powerful legs and sharp claws and teeth. These burrowing animals are known for their tenacity and great strength for their size. They are typically found in forests and grasslands in temperate to cold regions. They may be more complex than a passing adventurer might guess, for Tom Bombadil has stories to tell of their odd ways.[1]

While many dark and evil things are stirring in the land, the normal creatures are also agitated, making them more dangerous to travellers than normal. Badgers are generally no great threat to the wary, but one should be cautious around them, lest they leave you with a "badge" of scars to mark your meeting.

Locations where badgers can be found include:

Badgers threaten any who dare come too close, and will attack if the intruder does not back off. Badgers are usually of Swarm or Normal difficulty.

Badgers are more resistant to cries and, to a lesser degree, tactical attacks, than to songs and physical attacks. They have a slight vulnerability to Fire damage. Combat with badgers can sometimes cause one to contract a Minor Disease that drains power.

Though they are often a nuisance, they do not mean harm to people who leave them alone, and are considered Neutral in alignment.

True badgers have grey fur, with bands of dark and light fur on their long heads. The distinctive white stripe along the top of their heads is the "badge" for which these creatures are named. They are generally weaker than wolverines, and of Swarm difficulty.

Wolverines are animals akin to badgers and classified as the same species. Wolverines have brown fur with a lighter band across their forehead and shoulders, and their face, paws, and tail-tip are black. They are usually stronger than standard badgers and rated Normal difficulty.

In real life, badgers and wolverines are different species, but both members of the weasel family. The badgers in the game resemble the European badger.

In The Adventurers of Tom Bombadil, a collection of poems by J.R.R. Tolkien, Tom Bombadil has an adventure in which he is captured by intelligent badgers. This content is not included in the license to The Lord of the Rings Online, however it is alluded to in a line in The Fellowship of the Ring.

A list of badgers known to be dangerous to travellers: