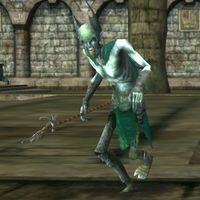 Ancient Evil are a genus of creature.

Ancient Evil is a broad categorization which applies mainly to entities who were in the service of Morgoth prior to his expulsion from the world.

Many of these are Umaiar, evil spirits who manifest in Middle-earth, while others are of unknown origin. Many Ancient Evil creatures who were scattered and diminished after their master's defeat have since regained their strength under Sauron and serve him. Others dwell in the deep places of the world and take no heed of the second Dark Lord.

Beings of Ancient Evil are nearly always aggressive. They are usually weakest to Beleriand damage, and tend to have minor weaknesses to the Westernesse, Ancient Dwarf-make, and Light damage types. They are most resistant to Common damage.

Barghests are vicious, corrupt hounds, known for their savage bite and chilling howl. The term is mostly used to refer to the red-eyed dogs that stalk haunted burial grounds, battlefields, and other places under an evil influence. However, in a broader sense it applies to all hostile hounds, ranging from wild beasts to Ancient Evil spirits that take the form of a hound.

The fearsome hounds kept by some farmers and guardsmen sometimes resemble these creatures, with their sharp teeth and pointed ears. Unlike those tamed animals, Barghests are a menace to adventurers and travellers.

Fell Beasts are winged creatures which serve as steeds for high-ranking wraiths, particularly the Nazgûl. Their true name, if they have one, is unknown, so they are commonly referred to merely as "fell beast". This is sometimes spelt Fell-beast or Fellbeast to distinguish them from other beasts that are fell. Beregond of Gondor once referred to them as "hell-hawks", but that term does not seem to be commonly used.[1][note 1]

The fell beasts resemble huge featherless birds with long necks, sharp teeth, and wings formed from a membrane of skin between horned fingers, similar to a bat or drake. They also give off a terrible stench.[2][3] They are sometimes mistaken for Dragon-kind,[note 2] whom they superficially resemble, though it is unknown if they are related to them or to natural beasts. They are believed to be the last remnants of creatures from an earlier era, raised by Sauron as steeds for his most fearsome servants.[3] Therefore, they are classified as Ancient Evil.

Fell beasts are most often seen being ridden by the Nazgûl or flying high in the sky around Dol Guldur. Other wraiths known to have a fell beast in their service include Mordirith and Uluithiad. In addition to allowing their riders to travel far and see much of the land below, these creatures are also used as weapons of terror. In battle, the cries of both the fell beasts and the wraiths riding them are used to demoralize their enemies, and they pose a more direct threat by snatching unlucky individuals and dropping them from high above.[4][5] However, lengthy combat encounters with fell beasts are rare.

Gaunt Men or Gaunt-men are one of the many creatures bred and twisted by Morgoth, the first Dark Lord, in Angband during the First Age. After Morgoth's expulsion from the world, the remaining Gaunt-men went into hiding in the realm that later became Angmar. Their power was greatly diminished, and the White Council mistakenly believed them to have been destroyed.[6] With the return of Sauron, their power has returned and they now walk the world again, along with the other forces of darkness.

As their name indicates, they resemble pale, emaciated mortal Men. They are clearly not alive in the same way mortals are, though unlike wights they seem to wither rather than decay.

Grims are spirits that manifest as swirling vortices of a particular element, surrounded by shards of solid debris. Grims dwell in locations with an affinity for their element, or are summoned by shamans, sorcerers, and greater spirits who hold them in thrall. They are usually minor in status, but a few truly mighty grims exist. The Gauredain believe grims are the lost souls of those of their people who have been exiled for cowardice. However, the wise believe they are spirits lingering in the world long after the fall of their ancient Dark Lord.[7] This would classify them as Umaiar, fallen Maiar lured to evil by Morgoth.

Merrevail (singular: Morroval) (Sindarin for Black-wing) appear to be a cross between bats and mortal women, but if the blood of Man ever ran within their veins, it has become utterly corrupt and evil. Their male equivalents are the Mervyl (singular: Morvul) (Sindarin for Black-slave), who are even more monstrous-looking. These creatures are not mere beasts, acting strictly upon instinct. They are instead cunning and skilful in the use of arms, and have some powers beyond the mundane, as well. The merrevail have ever been in the service of Sauron or his former master Morgoth and their lieutenants. They dwell in Mordor, Angmar, and Mirkwood, where the influence of the Dark Lords is strong. Merrevail from Angmar have also settled in the upper levels of Moria.

The female merrevail are more commonly seen and appear to be higher in status than the mervyl. Therefore, the species as a whole is referred to as merrevail. However, some mervyl still attain significant rank as warriors. Merrevail are usually lead by a queen or other matriarch of varying power. Lhaereth the Stained, a dreaded entity who has served Sauron since the First Age, is of morroval-kind but far more ancient, at least compared to the Stained Merrevail that are her followers in Mordor. The Song of the Stained, a text by one of those merrevail describes that Age as "the distant depths of time" before them.[8]. That implies merrevail are not Maia spirits from the world's beginning like some Ancient Evil, but come into being throughout history, like the mortal races. It is unknown if merrevail truly share kinship with the Men they half resemble, and whether they have limited lifespans, or breed like the incarnate races do. In any case, they are known to have some kinship with bats and use them as spies and protectors.[9][10]

The term Nameless (Narbugud in Black Speech, Binakhrâm in Khuzdul) encompasses many ancient and terrible creatures found in the remote places of Middle-earth. Some are known to be spirits who served Morgoth in the First Age and escaped his downfall. However, Nameless usually refers specifically to the creatures of unknown origin native to the deepest, darkest regions of the world, particularly the lowest depths of Moria.

'Far, far below the deepest delving of the Dwarves, the world is gnawed by nameless things. Even Sauron knows them not. They are older than he.'

If they are truly older than Sauron, beings of such evil nature are likely the result of the corruptions Morgoth wrought on the world when it was young. Some of these vaguely resemble the peoples of the surface world, only with hideous alterations. Others are more beast-like or unlike anything else in appearance. Certain other rare beings of ancient power that do not fit into any other category, such as fallen Wizards, are classified as Nameless for taxonomic purposes.

Regmyl (singular: Rogmul) (Sindarin for Demon-slave) are mighty demons of fire and shadow who are or were often servants of the even greater Balrogs.

At the dawn of the world, many powerful spirits chose to serve Morgoth, the first Dark Lord. Of these, perhaps the greatest were the Balrogs, the Demons of Might. Few Balrogs survived the Elder Days, but many spirits of lesser stature remain in the world, or wait in the Void for someone to summon them. Among these lesser demons are the Regmyl. While they are in fact minor spirits, they are among the mightiest of the sort: great brutes of evil will and fierce strength. Wherever a Balrog is or once was, it can be wagered that one or more Regmyl are not far away.

All recorded Ancient Evil by category: