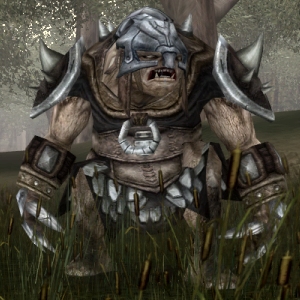 Trolls, the great, lumbering, man-like beasts of Middle-earth, are Elite and are always aggressive. They are weak to Fire and Light damage and to Songs, and are resistant to Common damage.

Trolls have existed in Middle-earth for as long as even the most ancient and powerful Elf-lords can remember. Creatures of the most corrupted evil, trolls are as dim-witted as they are strong. Despite their size, strength, and power, however most trolls do have a weakness: sunlight.

Trolls were first bred by the Dark Lord Morgoth in the First Age. How this was done is unclear. They may have been corrupted from an existing species of great size and strength, such as the Giants, corrupted Ents, or a similar race now lost to history. Alternately, Trolls may simply be counterfeits crafted out of stone and imbued with life by dark spirits.

Trolls are said to have been made in mockery of the Ents. Rather than a creature of nature and plant-matter, trolls are formed from the element of stone. Exposure to the light of the sun will return most trolls to the substance of their being, reducing them to mere inanimate statues.

There are many breeds of troll throughout Middle-earth, mainly categorized by the region in which they live. These include Stone-trolls, Cave-trolls, Hill-trolls, Mountain-trolls, Wood-trolls, and Snow-trolls. Other breeds of troll include the Ettens of the Ettenmoors, the fearsome Gertheryg of the First Age, the huge and powerful Olog-hai bred for the War of the Ring, and the rarely-seen Two-Headed Trolls. There also exists a race known as Half-trolls that appear to be a hybrid of trolls and Men.

"Quite the opposite of goblins, most trolls have little cunning or intelligence of any kind. They are, however, almost mindlessly brave, crushing anything in their path with abandon. Only if they are badly injured are they likely to rebel -- though the sight of a Cave-troll running amok through its goblin handlers is enough to bring a chuckle to even the most hardened of veterans." - Enmity of the Trolls II

Types of trolls include:

Trolls often form tribes, either by themselves or with other orcs or even being ordered into tribes by more powerful beings. Below is a list of all known tribes of trolls in LOTRO:

Like many of J.R.R. Tolkien's creatures, Trolls are derived from Norse and Anglo-Saxon mythology. "Troll" was originally a negative synonym used for the Jotunn, a race of giants and monsters. In later Scandinavian folklore, trolls became a separate creature.