The Lord of the Rings Online: Mordor

Index to all News postings

The Sixth Expansion to The Lord of the Rings Online MMO: Mordor

Standing Stone Games (SSG) announced the release of the Mordor expansion - the pre-order information can be found at: Mordor expansion The LOTRO Market (Turbine Store). Expected to be released the week of July 31, 2017. There are three levels of purchase. Standard, Collector's Edition and The Ultimate Fan Bundle!

* Note: The instance cluster and raid will follow in a patch soon after launch.
** All in-game items will be delivered at launch (scheduled to release the week of July 31.+) after the redemption of a Lord of the Rings Online™: Mordor coupon code. [By using the IN GAME Lotro store redemption interface] The Lord of the Rings Online™: Mordor is available in English, French, and German languages.

This means that to complete the purchase, you must create a Digital River Account. This will be the first screen you encounter.

If you do not see this email shortly after completing the order, check your junk or spam folders.

This code must be entered in the on-line store "Redeem Code" box, and then click "Apply".
Quit the Game, Launcher, Store (if opened in external Browser) and restart to enjoy the benefits.

This gives you VIP account access for 30 days when redeemed.
A separate email from Xsolla "Redeem Notification No. nnnn" indicates that you begin your premium access when you activate the "Pre-Order" code.
This code is not bound. You can pass it along to anyone.

Accessing further chapters of the Black Book of Mordor is contingent upon purchase of the Expansion.

Mordor expansion will be available for Store Points after Update 22 this winter. Point prices will be:

After purchasing the expansion, a product key code will be sent to the email address you used when completing your purchase. Log into the game and redeem your code in the LOTRO Store. You can apply your product key at any time before, during, or after Mordor launch.

Special Note: For the Ultimate Fan Bundle, you will receive a second product key code for 30 days of VIP access. VIP access begins once you redeem the VIP product key in the LOTRO Store.

If you’re already a VIP, it will be appended to the end of your current VIP term, pushing out your next billing date by 30 days.

Yes. Make sure you are giving them the VIP code and not your Expansion code by mistake!

Expansion bonus items will arrive on Mordor launch day after the game worlds re-open and your game client has updated with the Mordor content.

At this time, the Standard Edition, Collector’s Edition, and Ultimate Fan Bundle will remain available after Mordor’s launch day.
While the expansions will still be available in the LOTRO Market, please note that you will be unable to purchase the additional exclusive items through the LOTRO Store for store points.

Your product key will be sent to the email address you used when completing your purchase. Remember to check your Spam / Junk mail folders.

These are new Mordor relics with new stats. The Legendary item relics you get will be based on your class and have a minimum level of 100. You will receive an Expedition named Setting, Gem and Rune.

Housing decoration that is literally a Mysterious Door that will take you to Mordor. Anyone with visitation and decoration usage permissions in a house will be able to use this item. As a housing item this will be bound to account.

An earring of your choice (might, agility or will) with stats that increase as your level increases. Provides +25% experience gain on monster kills, crafting and quest completions through level 105. This xp boost WILL stack with the Shield of the Hammerhand and previous pocket items like the Gift of the Hornburg. Also provides +25% Legendary Item and Mounted Combat XP. The item and mount xp boost will NOT stack with the Shield of the Hammerhand’s equivalent effect. 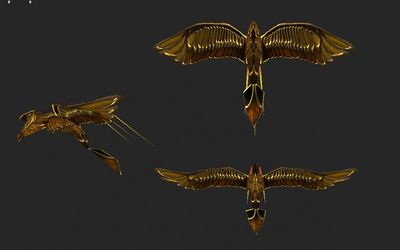 "Noble Eagle Kite" is available in the Ultimate-Fan Bundle 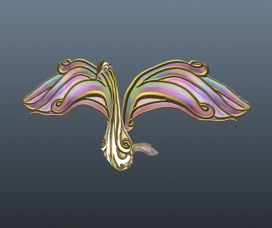 Alliance Themed Kite: "Hopeful Swan Kite" is in both the Collector’s and Ultimate-Fan Bundles.

This item is part of the

(Referred to in the bundle as "Exclusive Housing Teleport for all characters!")

The Housing teleportation item is a "Door from Mordor". It is a large-wall, housing decoration item which, when installed, will transport any character (who has Housing "Visitation", and "Use Decoration" privileges) to the Ruins of Dingarth in Dor Amarth on the Plateau of Gorgoroth in Mordor.

This item is contained within the

(Referred to in the bundle as "Equippable XP Accelerator for all characters!")

Gift of the High Elves  Grants a bonus to Character experience until the character reaches level 105.
+25% Experience Gain on Monster Kills, Crafting and Quest Completions.

Aria of the Valar

The Ultimate Fan Bundle does include 500 LP, through the Game Time VIP code. (A code for a month of VIP Access)

Links to Mordor on the WIKI