This page is about the world instance The Dungeons of Naerband. For the quest or public dungeon, see Naerband. 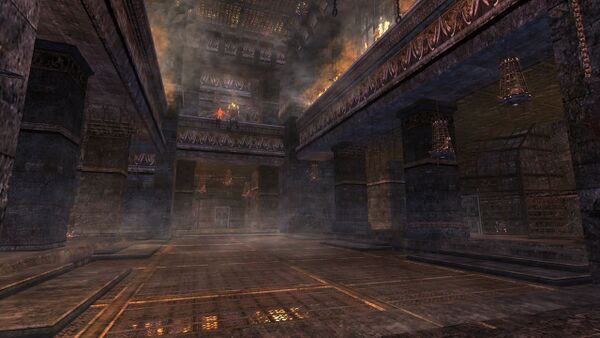 "The tightening grip of Gondor has compelled Urudanî, the Maiden of Flame, to seek a stronger alliance with Thraknûl, chief torturer of Naerband. Together, they have reforged the prison of Direhold into a place of flame, iron, and anguish."

The Dungeons of Naerband are filled with Ghâsh-hai orcs, desperate prisoners, and dark spirits of flame.

Unlike most world instances, the discovery for Dungeons of Naerband is at the exit of the instance, not the entrance. It's a sewer pipe, located at [62.0S, 19.7E], located just northeast of the "d" of "Naerband": 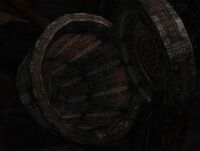 The Dungeons of Naerband is a scaling instance designed for 6 players (fellowship) levels 105 and up. Estimated completion time is 20-40 minutes.

First boss: Has multiple bosses. Initially there is a rotation of 2 random mini-bosses chosen from among several Scourges of Mordor.

Rotwing- mini-boss with a skill that has a purple unremovable fear icon. This skill is always a one shot. The player who gets it must run away from the other players since there is a huge AOE on expiration.
Finally you fight Gumog the torturer boss. He has plenty of adds, nothing special , you just need good aggro.

Labyrinth: Between Gumog and Thraknûl is the burning labyrinth. This is populated almost entirely by Flame-wraiths and Flame-spirits, with a handful of Ghâsh-hai orcs in the center and at the very end.

Second boss: Thraknûl Best tactic is to permanently kite the boss around the room. The reason you want to do that is because the bosses strongest attacks are close range melee. This includes a random heal debuff that is placed on a player. If that player is healed he will be instantly killed. So kite this boss. As his health drops, every so often he randomly ports a player into a cage cell. When a port happens, 3 adds will spawn and protect the boss. The other players must find the caged player and pull a lever just outside the cell to let them back out. If you keep attacking the boss and not let players out of the cells you will all be placed in cells and the last player will be teleported to the entrance of the dungeon. Each cell has a mob in it.

Note: this jailing mechanic makes this instance extremely difficult to solo, even if you have set the it well below your level.

If you want to do challenge , you must kill all prisoners in all the cells, you will have to slowly get caged over and over again.

The Dungeons of Naerband Mobs