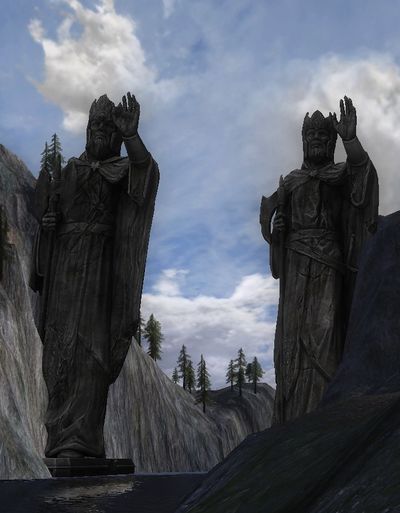 Also called the Pillars of the Kings and Gate of Kings.

Originally constructed about TA 1240 at the order of Rómendacil II to mark the northern border of Gondor, the two enormous statutes of Isildur and Anárion are carved into the sides of the Anduin Gorge as it surges through the East Wall of Rohan above the lake Nen Hithoel.

At the opposite end of that lake, above the lawn of Parth Galen stand the two outposts of Amon Lhaw (the Hill of the Ear in Sindarin) and on the western bank, Amon Hen (the Hill of Sight in Sindarin) with its Seat of Seeing. Each of the two figures was shown with an axe in its right hand and its left hand raised in a gesture of defiance to the enemies of Gondor.

"Long have I desired to look upon the kings of old… my kin."

Frodo peering forward saw in the distance two great rocks approaching: like great pinnacles or pillars of stone they seemed. Tall and sheer and ominous they stood upon either side of the stream. A narrow gap appeared between them, and the River swept the boats toward it.

"Behold the Argonath, the Pillars of the Kings!" cried Aragorn. "We shall pass them soon. Keep the boats in line, and as far apart as you can! Hold the middle of the stream!"

As Frodo was borne towards them the great pillars rose like towers to meet him. Giants they seemed to him, vast grey figures silent but threatening.

Then he saw that they were indeed shaped and fashioned: the craft and power of old had wrought upon them, and they still preserved through the suns and rains of forgotten years the mighty likenesses in which they had been hewn.

Upon great pedestals founded in the deep waters stood two great kings of stone: still with blurred eyes and crannied brows they frowned upon the North. The left hand of each was raised palm outwards in gesture of warning; in each right hand there was an axe; upon each head there was a crumbling helm and crown.

Great power and majesty they still wore, the silent wardens of a long-vanished kingdom […]. Even Boromir bowed his head as the boats whirled by, frail and fleeting as little leaves, under the enduring shadow of the sentinels of Númenor. So they passed into the dark chasm of the Gates.

"Fear not!" said a strange voice behind him. Frodo turned and saw Strider, and yet not Strider; for the weather-worn Ranger was no longer there. In the stern sat Aragorn son of Arathorn, proud and erect, guiding the boat with skilful strokes; his hood was cast back, and his dark hair was blowing in the wind, a light was in his eyes: a king returning from exile to his own land.

"Fear not!" he said. "Long have I desired to look upon the likenesses of Isildur and Anárion, my sires of old. Under their shadow Elessar, the Elfstone son of Arathorn of the house of Valandil Isildur's son, heir of Elendil, has nought to dread!"