I really like the table on the right with boss information! It's something that I would like to see implemented across the board for instance and raid boss articles. I'm going to modify it a little though, for example "Strength" is going to be moved down just above "Relative Difficulty" and called "Creature Difficulty", since that's the standard term used.

Altogether though, I think that making the table implementation above would require a lot of work, and it would be wonderful if someone were to design a template for both instance/raid articles and for boss articles. We could then discuss what to add, change or remove, and finally we'd be left with something as pretty as a female dwarf (trust me, they're gorgeous, you just haven't seen them yet...). That way, global changes would be much easier to implement if necessary, and the inevitable creation of new articles would always turn out as nicely as mentioned above.

I'll go ahead and post this idea in the instance discussion. Please redirect any responses there. --Fedaykin 17:40, 30 October 2007 (PDT)

I just noticed that they seem to have implemented a "creature analysis" that lets you view all sorts of information about bosses. "Creature Difficulty" is called "Type" there, so that's what I will change "Strength" to instead. --Fedaykin 17:56, 30 October 2007 (PDT)

im adding it for every boss i come by. I just did pretty much all of Carn Dum last night 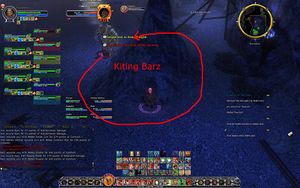 Barz being kited around the rock.

I would like to call for a revision of this strategy. Currently it says that Barz should be kited in a big, wide circle and that an Off-Tank, a Hunter and a Lore-master should be involved. This strategy is inefficient because Barz can actually be held and kited solo by a Guardian or Champion around a large rock located near the entrance to his chamber.

Refer to my example image on the right. As is indicated, he is being kited in a circle around the rock. This has the following advantages:

I agree, we actually do this every time. The headless chicken move really helps and makes the encounter rather trivial. However i could have sworn that was the case with Zurm and not Barz. we kite Barz around the temple looking structure and thus keeping him away from the rest of the raid (and his "gnaw" will never hit anyone even if shit goes wrong.
Where is this rock compared to the temple? and is it easier to kite him around the rock?--Anarchie 02:00, 26 November 2007 (PST)

Concerning Zurm, you may have noticed that after you made the article I pretty much changed the strategy from "kiting" to "tank-n-spank". I figured you had just copy-pasted the information from Barz and hadn't had time to fix the strategy yet. Either way, I modified it because Zurm has no special abilities that could seriously cause a raid to wipe and as such there is really no need to kite him.
Check the mini-map on the screenshot. You will notice that the rock I'm kiting him around is a little to the right when you enter his part of the mines. You might also notice all the green dots grouped up some distance away from me - easily far enough to be out of "Gnaw your bones" range. The one green dot that is a little closer to me is the Minstrel, just in case, though I can actually sustain my morale while kiting him. As for kiting him around the temple, I have never tried, so all I can say is that kiting him around the rock is really easy. --Fedaykin 16:32, 26 November 2007 (PST)

We usually play Barz as we do Zurm - it is not harder nor much different. This is our strategy:

1 - Have the MT aggro Barz. Let him alone with the boss until the first "I'll gnaw your bones" - at that moment MT should obviously, pull out.

2 - MT waits for the boss to end his ground pounding and goes back to him. Then raid starts slow DPS. Meanwhile, melee DPS attacks from behind and all run out in each "I'll gnaw your bones". Note: pay attention to the "local" log, not the voice as sometimes as he says two phrases in succession one of the won't be vocalized (no audio).

3 - A bit bellow 100k, the 1st wave of adds come. OT ready to pick up Cave troll, champion on the troll keeper. LMs debuff troll. Just keep troll away from the boss (and the party if possible), and DPS down fast the troll Keeper (time for heartseeker). Then the Troll.

4 - After dealing with the adds, go slowly. Hunters recover power and slow DPS on boss.

5 - Second wave comes. LM stuns Slave (no AOE near her). Hunters root the other 3 elites ASAP. OT picks up the target, hunters and other DPS assist. Kill adds.

6 - After killing all adds but the slave, kill Barz.

We do Zurm the same way, but without the "I'll gnaw" - on the other hand Zurm stuns the MT and disengages. The only "hard" part here is having the melee keeping focus on the "I'll gnaw your bones" - specially MT. But, tbh,that only reqires a little practice. In case he doesn't, and the adds are dead, you can always kite the boss around the rock - and kill him. Once we had a "less perfect" try - lost MT, OT on the adds, a healer and a couple others, but the remaining 5 still killed him :P

Yeah we have started keeping the slave stunned aswell. Works like a charm. The reason we kite is simply to keep damage down. Anyone can kite him really. I play a loremaster and if i happen to root him i get tons of agro, i kited barz around without losing any morale while the rest killed off the second wave. Kiting allows the minstrels to concentrate on healing the rest of the raid during ad wave. But yes its very possible to just tank'n'spank.

We've done this before too. We should list this as an alternate strategy. I'd like to add that this is also something that should be done for other boss fights - offering alternate strategies is useful to help groups who are having trouble with one, especially when it comes to group composition. --Fedaykin 16:23, 10 December 2007 (PST)

No power is stronger than Barz!!!

No power is stronger than Barz, and my raid learned this the hard way. We died many times despite following the strategy on the page. When Barz shouts "No power is stronger than Barz" He leaves the tank. This is well known. My raid IGNORED Barz when he did this... He then killed the captain. Then during the first round of adds barz called out the attack, and killed the LM, because we were ignoring Barz. It is amazing what he can do in 10 seconds. There was general confusion during the third attack, because the pale-folk were running around all over the place and were attacking the healer, so the MT died because of the lack of heals. (Our captain, and our R.K. were both unable to heal) Things then started to fall apart. I think that ignoring Barz when he runs around killing our fellowship is a bad idea. We didn't have to really worry "Gnaw" attack. However. I think you should mention that the healers should pay attention to when Barz does this, and start healing the fellow who is going to die. --Bonzesquire (talk) 19:57, 25 August 2011 (EDT)